Despite five COVID-19 cases in Ukraine's camp the day before the game, the Nations League fixture went ahead. Germany got the win expected of them and after a slow start, took a step forward in their development. 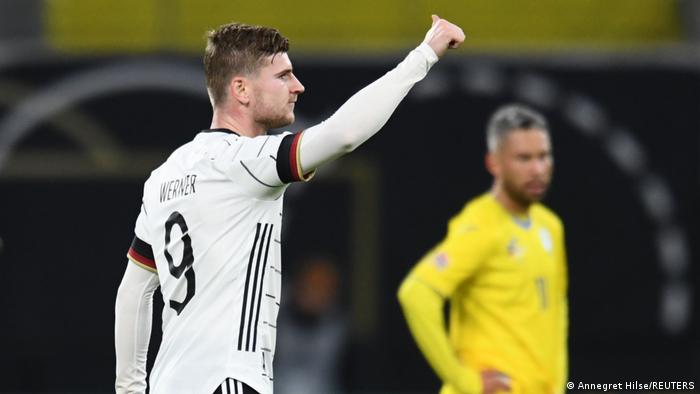 Joachim Löw said the test period was over, and, eventually, his Germany side proved him right.

Germany were far from perfect, had to overcome a disappointing opening half an hour and Ukraine hitting the woodwork three times, but for a side short on confidence that has spent too many recent games conceding late equalizers, a second straight victory was a big step in the right direction.

Löw said it was time for automatisms to start appearing, in essence calling for his side to start looking more like its best version. Conceding an early, sloppy goal to a team with three key players in quarantine was obviously not Germany's best, but it wasn't untypical for a defensive unit that has looked shaky of late — whoever has been a part of it.

But, after that and a slow period where Ukraine looked the better team, Germany were able to let their quality show on a night when football might not have been played at all.

"I think today was a good performance," Sané said afterwards. "We could have avoided the opener, but the way we kept going and came back was great. We made some simple mistakes but I think that's still part of it at this stage and I think the most important thing is the way we came back and won." 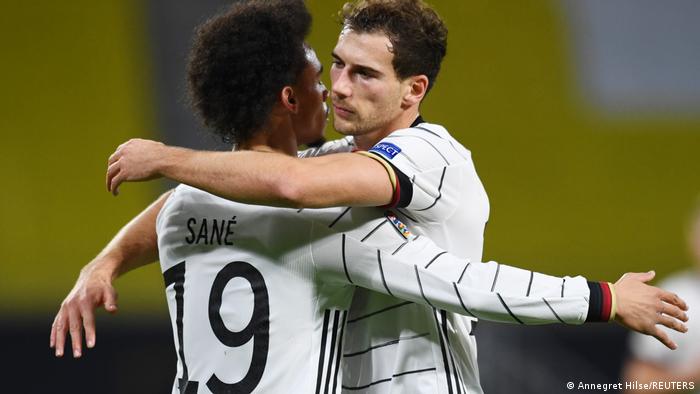 Timo Werner scored a brace, suggesting that all he needed to be the attacker Löw always wanted was to make the move to Chelsea. Philipp Max was good again, Robin Koch looked tidy in a holding midfield role and Leroy Sané showed why he will always start. Without Leon Goretzka though, Germany don't win this game.

The Bayern Munich midfielder delivered an exemplary 10-second spell for Germany's equalizer, winning the ball back, driving forward and delivering the perfectly-weighted pass for Sané.

For the second, it was his touch and vision that enabled Werner to score. With Joshua Kimmich (injury) and Toni Kroos (suspension) both out, Goretzka and Ilkay Gündogan showed that central midfield is where Germany's quality shines brightest.

"Our current situation has been talked about enough and the one thing that helps at the moment is wins and that's why it was a good night," Goretzka said afterwards.

Germany should have won by more. Their third shouldn't have been their last, but chance-conversion remains an issue.

"Our attacks in the second half lacked a drive to goal... We wanted to try and become more attuned as a unit and I think we did that pretty well today," Löw said afterwards, highlighting exactly why this was a night for optimism.

With Spain surprisingly drawing to Switzerland, Löw's side needs just a draw in Seville next week to claim top spot in League A, Group 4 of the Nations League. A win there would make this a November in which Löw's new Germany finally took a step in the right direction.

90' FT Germany 3-1 Ukraine — It's all over in Leipzig and Germany get a much-needed win and, for the first time in a while, put in a strong performance. Werner grabs two goals but there were a few strong performances out there, including Goretzka and Sane. Whisper it, but Germany remain unbeaten in 2020.

81' Unbelievable. Ukraine hit the post again. Substitute Moraes lets fly from the edge of the box and the ball takes a deflection off Koch and spins onto Neuer's left-hand post, with the keeper at full stretch. Germany's goal has lived a charmed life tonight.

77' Germany make a change with the scorer of two of Germany's goals, Timo Werner, making way for Julian Brandt.

75' Off the post again! Ukraine have hit the woodwork once again. This time Marlos bends a lovely shot towards the far corner. Neuer is beaten but the post comes to his rescue.

61' This time Sane creates a chance, albeit indirectly, for Gnabry. Sane's shot is blocked and the ball drops to his Bayern teammate, but Gnabry spurns the chance, sending it high and wide.

57' Gnabry feeds Sane in the box, but his shot is blocked at the last.

52' Off the post! Ukraine pushing for an equalizer as Zinchenko's pivot and shot deflects off Süle's foot and hits the outside of the post, with Neuer scrambling in the Germany goal.

45' HT Germany 2-1 Ukraine — An open and entertaining half comes to an end and Germany are edging it. There are more goals in this one.

40' Approaching half time and Germany have done a fine job of turning the game on its head after that early shock. They still look likely to concede but look more like scoring. Goretzka and Sane flying.

33' GOAL! Germany 2-1 Ukraine — Werner scores! Koch lifts a delightful pass into the path of Goretzka, who notches his second assist of the game by firing into Werner, who can't miss from close range on his old hunting ground.

30' Another big chance for Ukraine, who look like scoring every time they go forward. This time Zinchenko can't bring the ball under his spell in a great position in front of goal.

29' Rüdiger picks up a yellow for a pretty cynical trip on Yaremchuk, who is keeping the Chelsea defender busy.

23' GOAL! Germany 1-1 Ukraine — Sane levels! It's a fabulous finish by Leroy Sane to draw Germany level. Goretzka sets his Bayern teammate free with a nicely-weighted through ball, and Sane takes one touch to cut inside Matviyenko and another to strike a devastating shot into the opposite bottom corner. 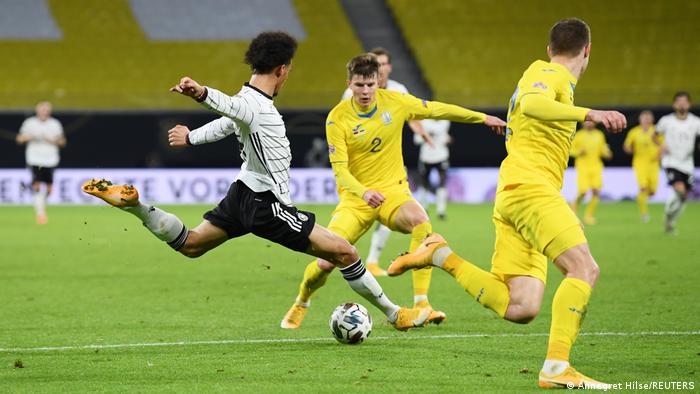 15' A huge chance for a second for Ukraine. Ukraine outnumber Germany on the break ith only Rüdiger back, but Marlos' pass to Yaremchuk is underhit and Rüdiger is able to get enough on the ball to intercept.

12' GOAL! Germany 0-1 Ukraine — Yaremchuk scores! It's a goal out of nothing for the visitors. Germany fail to clear after a strong run into the boy by Konoplia, the ball takes a fortuitous ricochet and Yaremchuk is the first to react, firing the loose ball into the roof of the net. 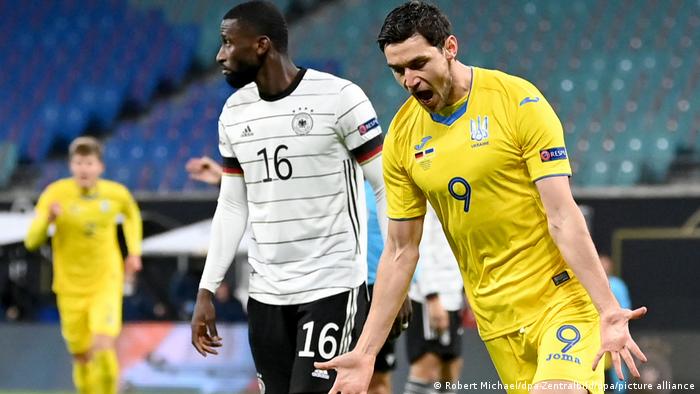 5' Germany creating plenty of chances early on, with Ukraine on the ropes already. Germany look fired up for this one.

2' An early chance for Germany, who have started very brightly. Ginter's low ball from the right misses everyone but Max fires it back in from the left and Goretzka, who takes the shot on the run, fires way over.

1' KICK OFF — We're underway in Leipzig. A game that many are surprised is going ahead.

Here's how Germany line up tonight...

A few facts and stats...

Following some uncertainty about whether this game would go ahead following a cluster of positive COVID-19 tests in the Ukraine camp, UEFA has given the game the go-ahead.

Five Ukrainian players will now go into quarantine but Germany's tests all came back clear, which allowed UEFA to make the call.

The game goes ahead.

The state of play

Germany began this month's international triple-header with a rather unspectacular 1-0 friendly win over the Czech Republic on Wednesday night, a second-string team prevailing thanks to Luca Waldschmidt's first-half goal.

But things get more serious on Saturday when Joachim Löw's side face Ukraine in their penultimate League A, Group 4 game in the UEFA Nations League.

As it stands, Germany are second in the group, level with the Ukrainians who they beat in Kiev last month, and a point behind table-toppers Spain, who they face in Seville on Tuesday. Another victory against Ukraine is necessary to ensure that Germany's chances of winning the group and qualifying for the Nations League Finals remain in their own hands.

In the short history of the Nations League, Germany have only ever won one game.

Eight first-team regulars have joined up with the squad in Leipzig as Joachim Löw rolls out the big guns for these two decisive matches.

The latter will miss the Ukraine game through suspension but spoke out this week about fixture congestion, accusing FIFA and UEFA of treating players like "puppets."

Several players have left the squad - not all of them voluntarily. As if confirming Kroos' concerns, Borussia Mönchengladbach winger Jonas Hofmann looks set to be out for several weeks after suffering a thigh injury which will not please his club coach Marco Rose.

Atalanta's Robin Gosens, a recent addition to the national team, is also out with calf problems.

Nico Schulz (Borussia Dortmund) and newcomer Ridle Baku (Wolfsburg) are also on their way home, but Philipp Max could feature again after impressing with an assist on his debut against the Czech Republic.

Bayern's Joshua Kimmich remains unavailable after injuring his knee against Dortmund, while BVB captain Marco Reus has been given leave to sit out this international break.