Germany got the win expected of them against the Czech Republic, but it was not a game that will live long in the memory. Ridle Baku and Philipp Max impressed as a patchwork Germany played one half of good football. 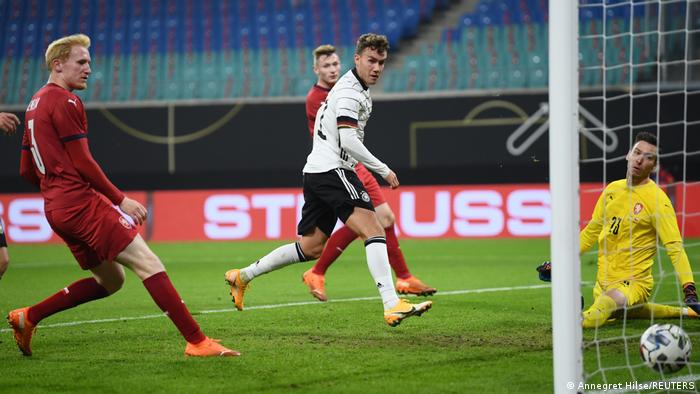 With two debutants in a largely second-string team, Germany's friendly against the Czech Republic was never going to be a game that provided too many indicators of this team's development.

Against a weakened Czech side, Joachim Löw's side got the win but it was a classic international friendly that reduced itself to the occasional tidy passage of play and a handful of notable individual contributions.

Both debutants Ridle Baku and Philipp Max impressed going forward, with the latter providing the assist for Luca Waldschmidt to convert from close-range.

"He played well in training yesterday too," Löw said of Max afterwards. "I'm happy with the new guys. Ridle worked hard on the right and Max was really good. Robin Koch was solid and well positioned. We had more quality in the first half with Ilkay but everyone was committed."

Indeed, captain Ilkay Gündogan coached his way through his one half, reminding everyone of his quietly important influence on this team, while Florian Neuhaus already looks here to stay.

"The most important thing today was the win and the clean sheet. We missed the chance to score the second and made life hard for ourselves, sometimes over-complicating things," Neuhaus said afterwards. "I think you could see that we only had one training session and that we haven't played that much together, but it was important we defended the win at the end."

In the context of this being a Germany team largely thrown together, it was no surprise this was a patchy performance that promised much but faded in a disappointing second half. Löw's side might have paid for it had Kevin Trapp not made a brilliant reflex save late on.

Perhaps it was unfair to expect more, but against a weakened opponent Germany could and should have won this game by more. A lack of playing time together might excuse another wobbly outing for the defense (although it is worth noting Germany finally kept a clean sheet), but it doesn't hide the fact Germany were poor in front of goal. Twice Nadiem Amiri and once Julian Brandt should have done more to make this game a confident win rather than a jittery one. 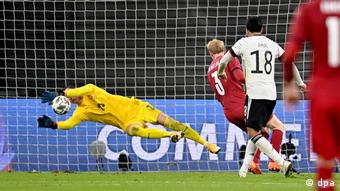 Amiri seemed certain to score but his shot was straight at Pavlenka, who stood up well.

Why play at all?

Gladbach head coach Marco Rose might remember it more than most, given that one of his players, Jonas Hofmann was brought off after just 20 minutes with a thigh injury. Rose will likely be displeased, as many club coaches are with the current international break, as players are stretched to their physical limit.

Indeed, Toni Kroos lamented the amount of strain currently on players, saying this week that tournaments such as the Nations League exist to "financially suck up everything, as well as physical draw everything out of players."

The absurdity of playing three international fixtures in the midst of a global pandemic was highlighted even before Hofmann's injury. Hours before kickoff, the Czech Republic confirmed their second COVID-19 case in their squad and German keeper Oliver Baumann left the squad out of precaution following the announcement of cases at his club Hoffenheim.

However absurd it seems, these games do matter to Germany. With the FA's treasurer recently telling German sports magazine kicker that, thanks in part to these international games, 2020 will end with the association breaking close to even rather than suffering a 16 million euro loss, it is clear to see the financial boost these games provide.

Whether those watching on will have been boosted by this Germany performance remains questionable. Oliver Bierhoff, Germany's team manager, said this week he was hurt that dark clouds were being drawn over this new Germany team. After tonight, Löw and his side only have themselves to blame for adding to that proverbial cloudy weather with a performance that flattered to deceive.

90' FT — Germany 1-0 Czech Republic — A less than thrilling game comes to an end with Germany edging out their timid opponents. Neuhaus almost added a stunning second goal but it ends in a slender win for the Germans.

77' Amazing shot by Neuhaus comes back off the stanchion between post and bar. It was a thunderous volley and would have been a goal deserving of another superb performance by Neuhaus, who has been a revelation since Löw called him up last month.

65' Midway through the second half and this really isn't a classic game of football. And Czech Republic are showing very little ambition, even against a second-string Germany team. Despite that, Joachim Löw's side are struggling to put the game to bed.

55' Germany looking to kill this game off early but they're struggling to convert their possession into goals or even concrete chances. The Czechs are sitting quite deep and keeping it tight for now. The best chance of the half has been a half chance for Neuhaus, who forces his way into a shooting position but drags his shot wide.

45' HT — Germany 1-0 Czech Republic — Germany lead at the break courtesy of Waldschmidt's close-range finish early on and the debutants have done well thus far. The Czechs haven't posed much of an attacking threat, but that hasn't stopped Germany looking shaky at the back. Germany have looked decent going forward — but Germany should be two up after that Amiri miss.

43' Amiri goes clean through and must score, but Pavlenka makes a big save to keep the visitors in the game. Good save but Amiri has to score there. The Leverkusen player really has to add goals to his game, he simply never looked like scoring. Neuhaus has a follow-up effort from a tight angle saved.

40' Interesting to see Neuhaus dropping back as an extra center back when Czech Republic are attacking. Germany reverting to a 5-4-1 out of possession. Although it must be said that Germany have looked a lot better with the ball and attacking than they have defensively.

30' The other debutant, Baku, forces a save from Pavlenka as both full-backs are making an impression on debut. The opportunity comes after Gündogan's shot is closed down.

25' Philipp Max is enjoying a fine debut. Yet another superb delivery from the left just needs a touch but Brandt doesn't get there and Amiri, who throws himself at the ball, just fails to connect. The PSV Eindhoven left-back has been a real threat for Germany tonight.

18' Pavlenka is able to continue after some treatment. Germany can relax a little, even if they look quite disorganized at the back. Joachim Löw has made his first change of the game, which is enforced due to injury to Jonas Hofmann, something that won't please Borussia Mönchengladbach coach Marco Rose. Hofmann is replaced by Nadiem Amiri.

13' GOAL! Germany 1-0 Czech Republic — Waldschmidt scores! Germany are off the ground through Benfica striker Luca Waldschmidt. Neuhaus has a shot from distance parried by Czech keeper Pavlenka, it comes out to Max who drills the ball back in from the left and Waldschmidt sticks out a leg and turns it in from close range. Pavlenka took a boot to the head and stays down but Germany lead in Leipzig. 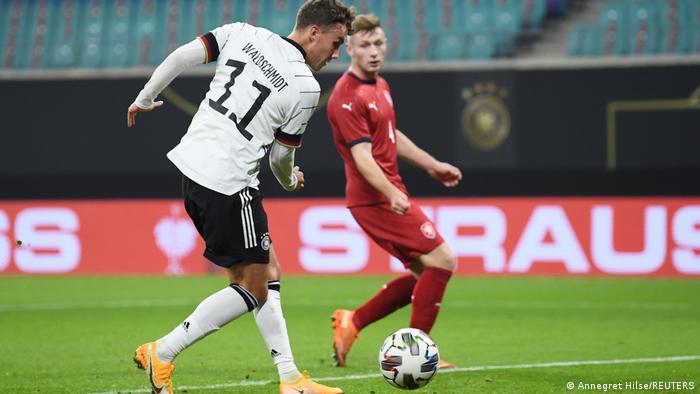 Waldschmidt tucks the ball in for Germany's opener.

10' Koch tidies up at the back for Germany, who look a little exposed when the Czechs hit them on the break. It's all a little last ditch as the Leeds man snuffs out the danger from Krmencik on this occasion.

5' A half chance for the visitors as Dokal tries to sneak the ball past Trapp at his near post but it slams into the side-netting. Germany generally enjoying the best of the early exchanges here. Gündogan seeing a lot of the ball and some nice link-up between Waldschmidt and Brandt, both of whom are looking to force their way into Germany's regular starting XI. 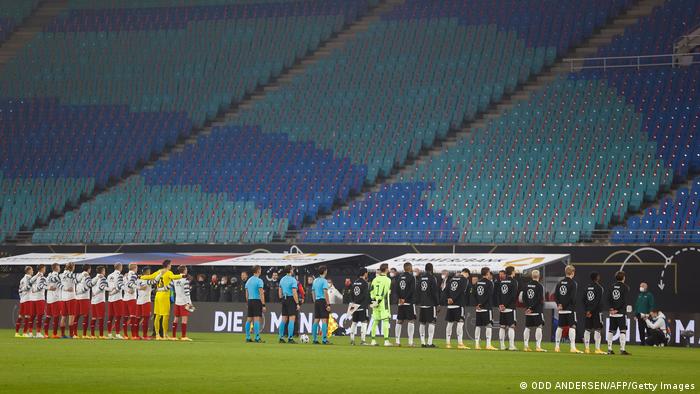 The Germany team has been announced and Joachim Löw goes with two new names. Baku and Max make their debuts while Ilkay Gündogan, who Löw said probably wouldn't start tonight, does so. Luca Waldschmidt leads the line in a Germany XI that consists mostly of understudies.

The games just keep coming and coming and coming. Just one month after the last international break, Germany return to action for another triple-header. On Saturday, they face Ukraine in the Nations League before wrapping up that campaign away at Spain on Tuesday. First, however, they face the Czech Republic in a friendly in Leipzig.

The state of play

With only one win in the Nations League so far - and, indeed, ever - Germany are second in Group 4 going into the final two games. One reason for that is their habit for conceding equalizers, especially late ones, as they did against both Spain and Switzerland (twice). They did hang on to beat Ukraine though.

They also let a lead slip three times in the last friendly against Turkey in Cologne, so that's something that Joachim Löw will be keen to avoid in Leipzig. But the head coach has rightly pointed out that it's difficult to be over-critical of the players in the unprecedented circumstances brought about by the pandemic.

"There are reasons why injuries happen," he said, referring in particular to Joshua Kimmich's self-inflicted knee-injury against Borussia Dortmund. "The players at the top clubs are playing every three days without breaks. If we as coaches don't act with the greatest of caution, we're all going to have big problems in summer. Huge problems.

"Those who draw up the calendar need to put their heads together in future because, at the moment, the players are carrying the burden.

Which is why he sees the friendly against the Czech Republic as a chance to rotate and experiment.

In Philipp Max (PSV Einhoven), Felix Uduokhai (Augsburg) and Ridle Baku (Wolfsburg), Löw has called up three international debutants who are all likely to feature in Leipzig. As if proving Löw's point, Robin Gosens and Benkamin Henrichs are also out injured while Borussia Dortmund captain Marco Reus is also given a rest.

"Marco has come back from a long injury layoff," he said. "He needs stability and should use these two weeks to work at his club. Hopefully it will do him good, because we all know what he's capable of."

Just one month after the last international break, Joachim Löw's Germany are back for another triple-header. Follow live updates here from their friendly against the Czech Republic in Leipzig.