The Ukrainian team were hit with a cluster of positive COVID-19 tests the night before their game against Germany in Leipzig. UEFA's decision to go ahead regardless sends the wrong message, writes DW's Jonathan Harding. 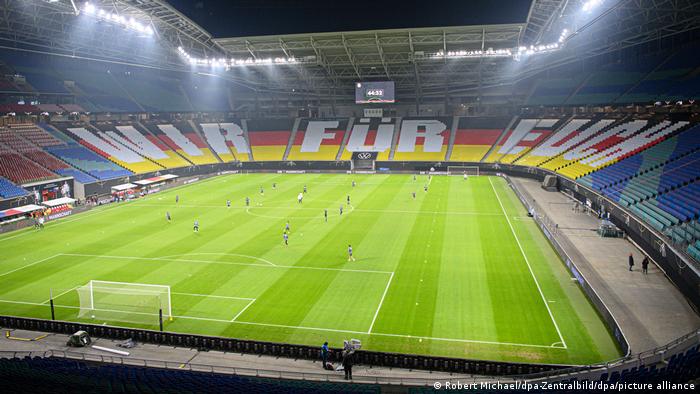 Football is not even hiding it anymore. The decision for Germany to play Ukraine in the Nations League in Leipzig despite five COVID-19 cases being confirmed in the Ukraine camp the night before is proof that football operates by another set of rules.

This game matters because of seedings and rankings, and because Germany's FA is desperate for a financial boost after a year of more financial irregularities and decreasing interest in their men's team. But at what point do we take a step back and look at what is happening?

Toni Kroos said this week that he felt like a "UEFA puppet" and that players were not consulted on the matter of new competitions. Given that UEFA has said there is no reason to cancel a game as long as a team has 13 players available, it is clear that what matters is the product being sold.

The possibility of simply paying associations the money agreed in the contracts to play these games, not actually playing any football but allowing everyone the chance to stay healthy and get some well-needed rest seemingly doesn't exist. Football, or more accurately the money it generates, rules the world, and the human beings playing the game just do not matter as much.

Everyone involved in both Germany and Ukraine camps tested negative before the game, and the five people who tested positive were already in quarantine. But symptoms can take anywhere between 2-14 days to appear, so where does that leave the players and their health next week? Nevermind, at least they're clear to play tonight.

This is the last straw of football losing its soul. The sport has largely done fine without fans for months. Most of us are left watching the game alone with little but the sound of fake atmosphere to accompany us. And now we have to watch as the associations and governing bodies of the world's most popular sport do all they can to make sure the show goes on, whatever the cost.

Quite frankly, this is a disregard for human health. The players involved are athletes with superior physical attributes, but that does not make them immune — nor does it stop them from spreading the virus. Beyond that, what about the physical effects of playing endless games in an unusually packed schedule? There is a reason there have been so many injuries this season. And what about the mental health impacts of trying to match high-performance expectations every three days? However much football wants you to believe players are machines the truth is they are are people too.

This global pandemic has taken the lives of more than a million people and interrupted the daily lives of almost everyone, but football? On it goes. The wheels must keep turning and the message that sends is loud, clear and shameful.