Refugees in Germany: Lama Suleiman feels more German than Syrian | Germany | News and in-depth reporting from Berlin and beyond | DW | 30.08.2020

"Noooo," Joud screams as his sister splashes his feet with cold water in the bath. "Joud doesn't like cold water, even in the summer," Lama explains and opens the tap a bit more to be able to wash off the sand between Joud's toes. They both laugh, and Joud quickly jumps out of the bath.

Lama, who is nearly 9 years old and Joud, who is nearly 7, have just come back from the playground. Lama loves the climbing frame there, although she'll make do with the door frames or wardrobes at home if need be.

"Here, on the wardrobe under the ceiling, is the best spot for when we play hide and seek," Lama says. "No one can find me there. But don't tell mummy," she adds, as she has told her not to go up there because it's too high and dangerous. Lama's German better than her Arabic

Lama speaks German with me and with her siblings; she sings German nursery rhymes and watches German television. She speaks Arabic with her parents, interspersed with German words. When her parents try to speak German, it is Lama who corrects their grammar and helps them find the right words. She is the family's mouthpiece.

When her family fled Syria in 2015, she was four, Joud was two and Karam a mere 10 months old. Sam, the smallest child, had not been born yet. Lama does not remember the arduous journey. But I do. I accompanied them as a reporter for Deutsche Welle and got to know the Suleiman family in Turkey.

Back then, Lama only spoke Arabic — she was a Syrian girl.

When Lama's mother talked to me the night before they embarked on the dangerous trip across the Mediterranean on a dinghy, she burst into tears: "I hope we'll all make it or that we'll all die," she said then. It was Lama who cuddled up to her crying mother, trying to comfort her.

The family did reach Greece, then travelled on to Macedonia, Serbia, Croatia and Hungary. 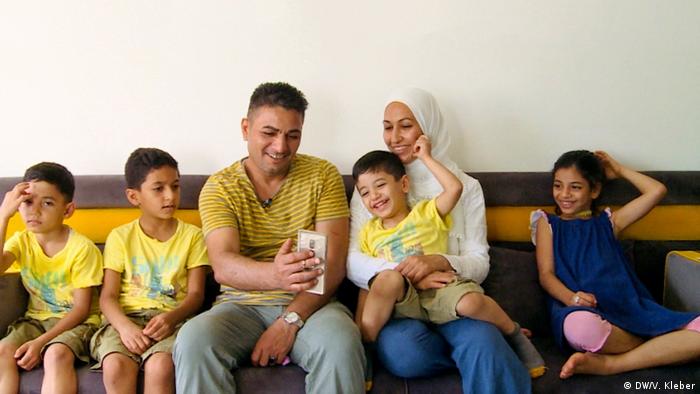 Syria just a place in a story

From there, they had to walk three kilometers (1.9 miles) to the border with Austria, with mother and father carrying their children, but Lama being the oldest, had to walk. Soon, the kids were exhausted and crying. The parents found it hard to comfort them, as they were exhausted too.

For Lama, these are mainly stories today, but her parents are still shaken by the experience.

Syria, too, is merely a place in a story for Lama. She cannot remember the bombs that destroyed her family's home and hurt her. For her, Syria is the country of her parents, where her aunt and uncle live, and, until recently, her grandmothers.

Lama's family have been looking for a flat in Berlin for four years now. They've lived in several different districts, but Lama stayed in the same kindergarten and now school, which means it sometimes takes her over an hour to get there.

"That's when I was allowed to play on daddy's cell phone or I took a nap," Lama says.

Lama's favorite subject is math, but she also likes art. In her report card it says that Lama is very conscientious, diligent and interested. She is always willing to help other children, and she puts pressure on herself to keep up with the other kids' pace.

Homeschooling during the coronavirus pandemic has been tough as her parents could not provide her with the necessary help. Her teacher has therefore recommended that she repeat year two, which came as a shock for Lama. "She cried for days," her father tells me, adding that it made him and his wife feel bad, too.

"We try and do everything for our kids, and when that's not enough, it really hurts."

Lama is now in the same year as her younger brother, which she is not best pleased about. "But I can do joined-up writing already, so that'll be a surprise for everyone in my new class."

When Lama grows up, she wants to be a dentist. "Peferably, not too far away from here, where my mum and dad are, and my brothers."

For recognized refugees in Greece, the hardship isn't over

Life for refugees in Greece does not always get easier when their status is officially recognized. On the contrary: Often already traumatized by war, they face the risk of poverty and homelessness.