Germany's cabinet has approved measures allowing Germany's military to chase traffickers' boats in the Mediterranean. Previously, the mission was strictly search and rescue, with suspected traffickers allowed to sail by. 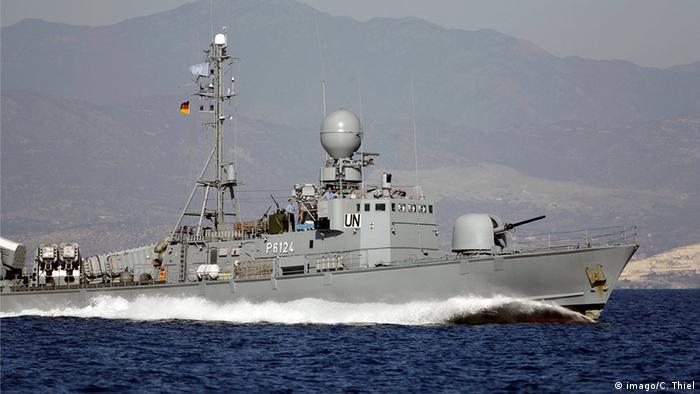 Chancellor Angela Merkel's cabinet on Wednesday approved an extended Bundeswehr mission in the Mediterranean, which could in future involve up to 950 soldiers. The soldiers would join an EU military mission aimed at dismantling the trafficking networks bringing migrants from North Africa to Europe in unseaworthy boats.

The German navy has already been patrolling waters between Libya and Italy under the EU's naval operation, "Eunavfor Med," but its role has mainly been restricted to collecting intelligence and rescuing migrants.

EU member states on Monday endorsed plans to ramp up military action against people smugglers, paving the way for the bloc to seize and destroy boats and arrest suspected criminals in international waters. Formal approval for the plan is only expected once member states like Germany have pledged the necessary military equipment and manpower.

Currently, 320 German troops are deployed in the Med, already making it the Bundeswehr's third-largest international mission, after the peacekeeping efforts in Afghanistan and Kosovo.

Intelligence gathered so far indicates that smugglers often leave Libyan waters to point migrant boats towards Europe, or even to recoup vessels later if the occupants are rescued at sea. According to a source cited by DPA, the expanded mission would allow special forces to board boats and apprehend smugglers, with a view to them being prosecuted in Italy. Migrants onboard the vessels will be brought to Italy, while the boats will be sunk or towed back to the mainland for destruction.

Europe is struggling to cope with a record influx of refugees as people flee war-torn countries such as Syria, Afghanistan and Iraq. A key route for many desperate migrants has been the dangerous Mediterranean Sea crossing from northern Libya. The International Organization for Migration says 2,748 refugees have died at sea so far this year from a total of 430,000 attempting the voyage.