EU to launch unprecedented military mission in the Mediterranean

Thousands have died in the past 18 months trying to seek refuge on European shores by way of the treacherous Med crossing. The EU is set to approve plans for a sweeping naval mission to stop the human trafficking. 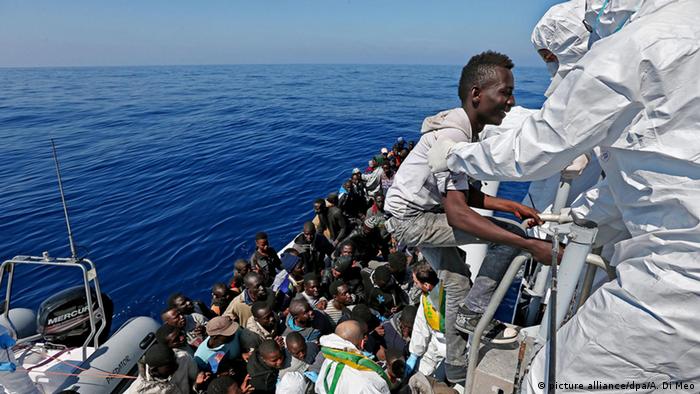 The European Union's foreign and defense ministers were scheduled to convene in Brussels on Monday morning to finalize the new mission, which will include a formidable naval force to combat human trafficking in the Mediterranean Sea after a spate of shipwrecks that killed hundreds of would-be migrants.

Beginning in June, the ambitious program will deploy surveillance aircraft and warships off the coast of Libya, where most of the ill-fated vessels have set sail.

Ahead of the meeting, German Defense Minister Ursula von der Leyen said that "the highest priority is to rescue the migrants in peril at sea," and that she expected there to be significant progress in addressing the problem after Monday's meeting.

It's an unusual step for an organization that often prefers political and financial solutions, but the EU hopes to identify, intercept and possibly sabotage the traffickers' ships in an effort to quash this particular "business model."

However, the program approval may be pointless unless the EU is successful in winning a UN resolution backing military action against the smugglers.

Should they be successful in gaining UN support, NATO "stands ready" to aid in the mission, said the alliance's Secretary General Jens Stoltenberg.

The plan has also met with some opposition in Germany despite the fact that German boats have already been sent to rescue the migrants and then sink the traffickers' vessels. Some say the sunken vessels present a maritime hazard, and others, like Development Minister Gerd Müller, say that the whole plan presents "too many risks and doesn't solve the actual problem" of migrants trying to reach Europe by any means available.

In a rare moment of agreement with Christian Social Union (CSU) lawmaker Müller, the opposition Green and Left parties said a military mission was the "absolutely wrong way," to handle the crisis, according to Green leader Simone Peter.

Over 5,000 migrants, the majority of them fleeing the violence in Syria, have lost their lives trying to make the perilous crossing from northern Africa to Europe over the past 18 months, usually in rickety dinghies or overcrowded, flimsy fishing boats.

The mission will be called EU Navfor Med, and headquartered in Rome. The operation's leader with be the Italian Rear Admiral Enrico Credendino, according to the AFP news agency. Several EU nations, such as Spain, Italy, Germany, France and Britain have already vowed to send warships to participate in the program.

The controversial measure for distributing quotas of migrants throughout the EU has sparked an outcry in some countries such as Poland, Hungary and the Czech Republic, while the UK has said it refuses to participate.