German naval ships have been ordered to sink migrant ships in the Mediterranean after rescuing passengers, according to a report. Bundeswehr rules also call for rescued migrants to sleep on ship decks. 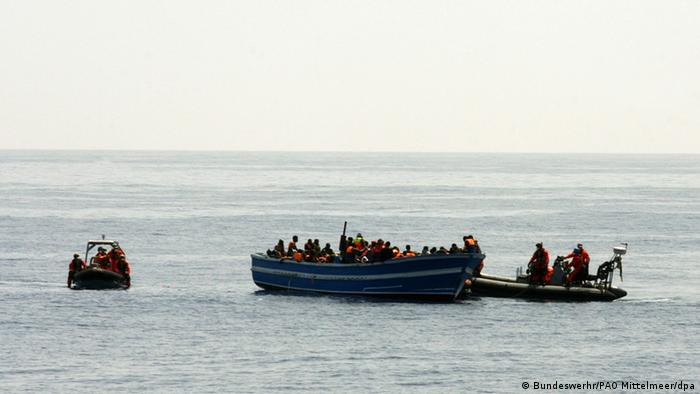 Since May 5, the Bundeswehr ships Hessen and Berlin have reportedly sent four inflatable boots and one made out of wood to the murky bottom of the Mediterranean Sea near the coast of Libya, as part of their mandate to destroy migrant boats upon taking the passengers aboard.

"Otherwise, they would present a maritime barrier to other boats on the open sea," frigate Captain Alexander Gottschalk told the mass-circulation newspaper Bild am Sonntag. "Also, from the air, we might perceive an empty boat as a boat in distress and go try to save it."

Gottschalk added that migrants would be checked for potential weapons before being taken aboard ships. He said during their transport to centers in Italy the migrants would sleep under tarpaulins on deck, which he called feasible in the mild 20-degree Celsius (68 degrees Fahrenheit) days of summer.

Up to 2,000 migrants have drowned since the beginning of 2015 in the waters between North African launching points and the southern European coast, including more than 800 people in a single accident in April. EU foreign and defense ministers plan to meet Monday to discuss such issues.

On Saturday, French Prime Minister Manuel Valls said he opposed a quota to spread migrants around the European Union based on members' populations, employment levels and other factors - what German Foreign Minister Frank-Walter Steinmeier has referred to as "sharing the burden." Roughly 50 percent of Germans approve of the country's potentially taking in more migrants.

The quota plan, however, appears to be unraveling in the face of opposition from other EU countries. Though the European Union has yet to hash out exact details of the plan, countries such as Hungary, Slovakia and Estonia have already rejected it.

In an interview published in the Sunday edition of Die Welt, Steinmeier, a member of the Social Democratic Party, said in the coming days officials would have to "clear up complicated legal, political and practical questions" before launching an EU anti-smuggling military mission in the Mediterranean. He added: "Last but not least, we need close coordination with the United Nations Security Council and sufficiently reliable agreements with Libya."

Authorities have yet to work out how exactly to differentiate smugglers from vessels with legitimate reasons to be on the sea. Ideas presented satellite or drone photos of boats on the Mediterranean.

EU officials also need to figure out what to do with migrants once they have been taken off the smuggling ships, on which many likely had paid personal fortunes for safe passage. Federica Mogherini, the European Union's foreign affairs coordinator, has said that no migrant will be returned to Libya, a main launching point for many but the country of origin for few, against his or her will.

Malaysia has launched high-level talks to tackle the growing migrant crisis in Southeast Asia. But as some ASEAN countries put the blame on Myanmar, the government says it is not their problem. (17.05.2015)