The EU's foreign policy chief has told the UN Security Council that the first priority in confronting the Mediterranean migrant crisis is to save lives. Some 5,000 refugees have died in the last 18 months. 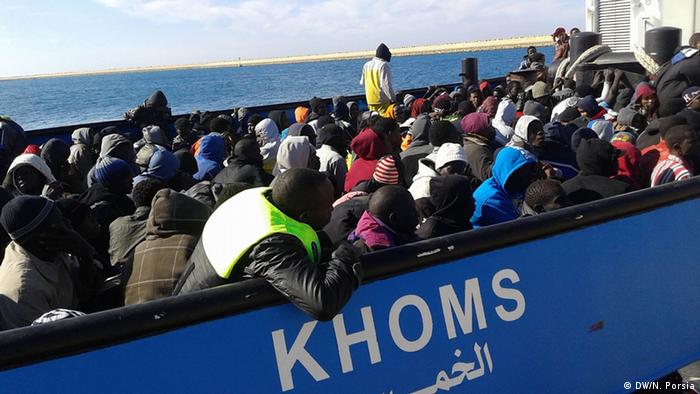 Speaking before the 15-member council in New York on Monday, Federica Mogherini said the migrant crisis "is not only a humanitarian emergency but also a security crisis since smuggling networks are linked to and finance terrorist activities."

"Our first priority is to save lives and prevent further loss of lives at sea," she added.

Mogherini is currently in the US seeking support for a controversial EU plan which aims to stem the tide of refugees making the perilous journey across the Mediterranean.

The blueprint suggested by the EU involves military action to destroy boats used by migrant smugglers, who have seized on the chaos in Libya to set up operations.

"We cannot work alone. We need a partnership if we want to end this tragedy," Mogherini said.

Faced with more than 1,800 dead this year alone, Mogherini described the migrant flow as an "unprecedented situation."

"We need an exceptional response," she told the council.

Call for support within the EU

UN Security Council members Britain, France, Lithuania and Spain are currently working with Italy on a draft resolution that would endorse the EU migrant crisis plan.

For months, Italy and other southern European states have been demanding help from other EU nations, with pressure for action intensifying last month when 800 migrants drowned as a ship sank off the coast of Libya.

The latest plans to take military action have been condemned by human rights and aid organizations, however, who argue that the focus should instead be on broadening legal avenues for migrants to reach Europe.

Headed for Europe, waylaid in Libya

Libya is a way station in many migrants' journeys across the Mediterranean to Europe. For some it becomes a jail, for others a death trap, even before they make contact with smugglers. Nancy Porsia reports from Misrata. (11.05.2015)

Libya's internationally recognized government in Tobruk has admitted to attacking a Turkish cargo ship. The incident claimed at least one life and left several others wounded. (11.05.2015)

German marines have rescued 200 refugees shortly after launching two ships to scour waters between Africa and Europe. The boat carrying the migrants was found 250 kilometers south of Italy's Lampedusa. (08.05.2015)