At least 34 people trying to reach Europe over the Aegean Sea have drowned as the influx of refugees to the continent continues. Greece has meanwhile dismissed criticism of its handling of the situation. 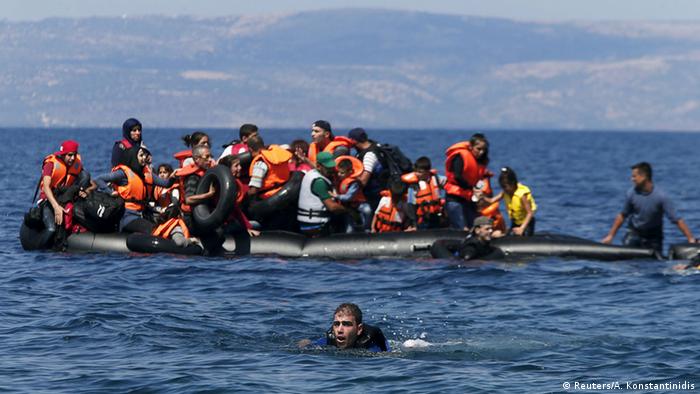 A wooden boat carrying some 130 refugees sank off the southern Aegean island of Farmakonisi on Sunday, with at least 34 people drowned, according to Greek media.

Among those killed were four babies and 11 young children, the Athens News agency reported.

State radio, citing the Greek coastguard, said that rescue teams had saved 68 people from the waters, and that 29 refugees had managed to swim to shore.

Eight of the victims were reported to have been found by coastguard divers in the boat's hold.

The coast guard said it was almost certainly the worst such incident in the region since the refugee crisis began.

The disaster came after two rubber dinghies capsized in the morning off the islands of Samos and Lesbos. Local media reported that the coastguard was able rescue a total of 56 refugees from the two boats, but five migrants, including four children, were still missing. 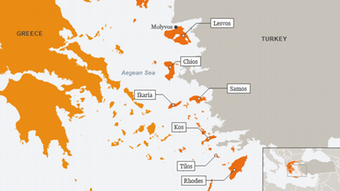 Many Greek islands lie just off the coast of Turkey

The disasters occurred as strong winds were affecting the area.

Thousands of refugees, many fleeing the devastating civil war in Syria, are trying every day to reach one of the Greek islands by boat from Turkey's Aegean coast. Most want to transit Greece for western European nations such as Germany and Sweden.

Greek authorities are currently employing three ferries between the islands of Lesbos, Kos, Kalymnos and Leros to bring the crowds of refugees to the mainland.

Responding to criticisms leveled at Athens over its handling of the refugee situation, the Greek interim prime minister, Vassiliki Thanou, on Sunday said it was "unacceptable" for people to accuse her country of not doing enough to manage the crisis.

"Greece is strictly applying European and international treaties without ignoring the humanity of the situation," she said on a visit to Lesbos.

"We would urge [those who criticize] to consider the responsibility of guarding a 16,000-km-long coastline of European borders ... and whether a future Europe of principles can be constructed by building walls," she added.

German Chancellor Merkel on Saturday called on Athens, which is already struggling to cope with Greece's deep economic crisis, to do more to protect the external borders of the European Union.

The International Organization for Migration says 2,748 refugees have died so far this year trying to cross the Mediterranean to Europe from a total of 430,000 attempting the voyage.

In another instance of the perils facing the refugees on their trek, Austrian police said on Sunday they had rescued 42 people from a refrigerated truck on a highway near the border to Germany.

In a statement, the police said all the refugees found in the Finnish-registered truck were in good health, and that the suspected smugglers, two Iraqis, were arrested.

Last month, 71 refugees were found dead inside a truck on a highway in eastern Austria. Police say the victims probably died of suffocation.