Ban Ki-moon says the EU should focus on saving migrant lives at sea rather than sinking smuggling boats. The European Commission has called for the redistribution of 40,000 migrants currently in Italy and Greece. 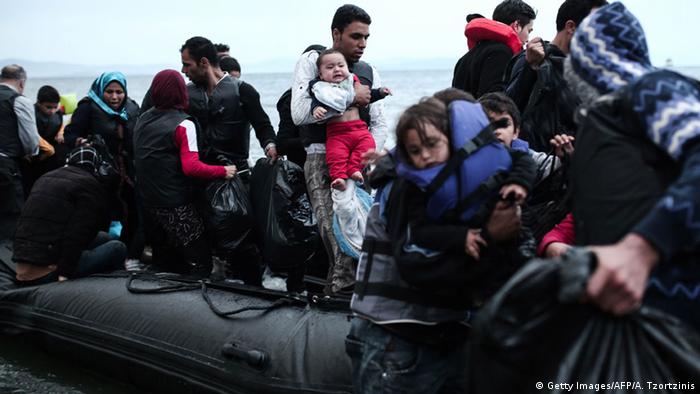 "The priority should be given to lifesaving and strengthening search and rescue," Ban said Wednesday after meeting European Commission President Jean-Claude Juncker.

The EU has tripled funding for its Triton and Poseidon patrol missions, with the Frontex border agency enlarging Triton's operational area to 138 nautical miles (255 kilometers) south of Sicily and allowing for more aircraft, boats and teams during the northern hemisphere's summer months, when more migrants attempt the crossing. EU officials have expressed a strong desire to destroy smuggling vessels in waters belonging to Libya - a plan that would require UN approval.

As expected, on Wednesday the European Commission proposed that EU states take in 24,000 migrants currently in Italy and 16,000 in Greece - about 40 percent of the "asylum-seekers in clear need of international protection," primarily Syrians escaping the civil war and Eritreans fleeing dictatorship. The Commission also recommended that member states take in 20,000 migrants currently outside the EU, such as Syrians in UN camps, to prevent them from turning to smuggling networks.

Under the quotas, migrants would go to 23 countries - Britain, Ireland and Denmark would opt out - but governments must approve. Based on population sizes, unemployment rates, wealth and existing migrant intake rates, the largest contingents would go to Germany and France. Germany would take in 8,763 people, or roughly 22 percent, followed by France with 6,752, Spain with 4,288, and Poland with 2,659.

Günter Burkhardt of German migrant rights organization Pro Asyl called the plan "too hastily considered," saying: "No Syrian whose family lives in Germany would willingly allow himself to be distributed to Hungary, Poland or Estonia. People can't just be shipped around Europe like cargo."

In contrast to his disapproval of military deployment, UN Secretary-General Ban has expressed his support for the plan to redistribute migrants: "I encourage the EU member states to show compassion as they consider this important proposal to share their resettlement responsibilities," Ban said.