Germany's Financial Intelligence Unit says suspected cases of money laundering and terrorist financing jumped by 50% in 2019. The real estate market is especially vulnerable when it comes to suspicious transactions. 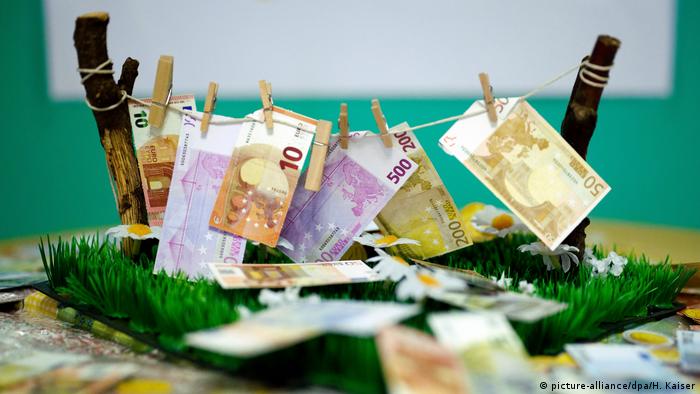 That amounts to a jump of almost 50% compared to the previous year.

According to an advance copy of the Financial Intelligence Unit's (FIU) 2019 annual report released to the paper, the bulk of those cases were flagged by German banks and other financial institutions, as well as notaries and real estate agents.

The cases were linked to a total of 355,000 suspicious transactions.

"One problem for us is that the prosecution of money laundering in Germany isn't traditionally well established," FIU head Christof Schulte told the Tagesspiegel.

In its annual report last year, the FIU registered just over 77,000 cases of money laundering and noted an "extreme vulnerability" in Germany's real estate market when it came to dubious business deals.

German lawmakers passed a raft of anti-money laundering measures in November in an attempt to tackle the problem and bring the country in line with EU directives. Among other changes, the legislation imposed stricter regulations obligating real estate agents, notaries, precious metals dealers and auction houses to declare suspicious transactions.

Anti-corruption group Transparency International had called on Germany to implement reforms after finding that about €30 billion ($34 billion) of illicit funds were funneled into German real estate in 2017. It said criminal networks, particularly the Italian Mafia, had managed to exploit legal loopholes to launder money through properties in Germany.

According to the organization, 15-30% of all proceeds from criminal activities are invested in real estate, either through building and renovating, or buying, selling and renting.

The FIU, based in the western city of Cologne, is part of Germany's customs authority.

Germany's government is unveiling a new law aimed at combating money laundering in the real estate sector. It's estimated that billions in illegal earnings are funneled into the German property market each year.

The German Finance Ministry has announced the creation of a new agency meant to "follow the money" and prevent financial crime. But experts are skeptical, given Germany's traditional love of cash.

Huge sums of money of illegal origin are channeled into the regular economy every year. The EU has now prepared a comprehensive reform in order to crack down on money laundering. Bernd Riegert reports from Brussels.