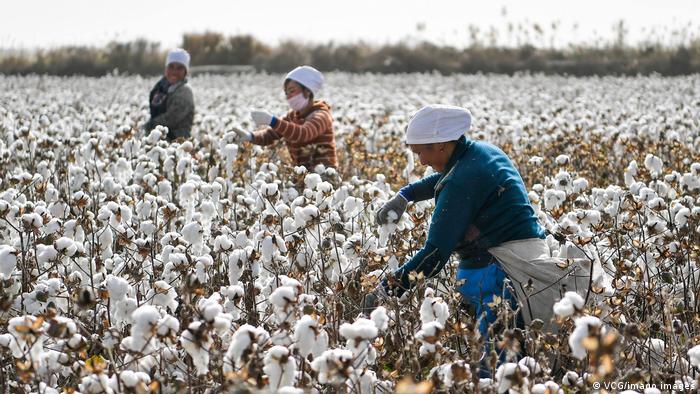 Some 20% of the world's cotton supply is produced in China and of that, 80% is sourced from Xinjiang

The European Center for Constitutional and Human Rights (ECCHR) filed a criminal complaint in Germany against five major retailers Monday.

The ECCHR said the complaint is the result of an open source investigation based on information that the five companies had listed "publicly and voluntarily" identifying their suppliers in Xinjiang.

"The question is whether entertaining business relationships is not a way of aiding and abetting those international crimes," said Miriam Saage-Maass, the head of the ECCHR's Business and Human Rights Program.

How have the German companies reacted?

The Aldi Group said the rights group's claims were directed at the supplier Turpan Jinpin Knitting. The company said it had stopped purchasing items from this manufacturer at the end of 2019.

C&A denied purchasing garments from any Xinjiang-based suppliers and said it had not sourced yarn or fabric from there.

Hugo Boss likewise rejected the allegations and said its "values and standards were adhered to in the production of our goods and that there are no violations of the law."

Chinese cotton makes up about 20% of the global production of cotton. About 80% of that is produced in Xinjiang, where forced labor of Uyghurs is common in what China has denied are labor camps but instead insists are vocational training institutes.

China has said such training is necessary to counter violent extremism.

"We do believe that those five are really only an example of a much wider and more systematic problem," the ECCHR's Saage-Maass said, adding that "it's very likely that there are many more companies sourcing from the region."

In a statement, the ECCHR said "international law experts have qualified the treatment of Uyghurs in the region as amounting to crimes against humanity. Yet, European clothing brands and retailers source or have until recently sourced goods from companies in that region, according to the supplier lists they publish.”

While China has denied US allegations that the country is actively engaged in a genocide of its Uyghur population, brands such as Adidas, H&M, Nike and Uniqlo announced they would no longer buy Xinjiang cotton last year, leading to boycott calls in China.

US ups pressure on EU over Xinjiang