Germany quintuples arms sales to Saudi Arabia and Egypt | Germany | News and in-depth reporting from Berlin and beyond | DW | 14.11.2017 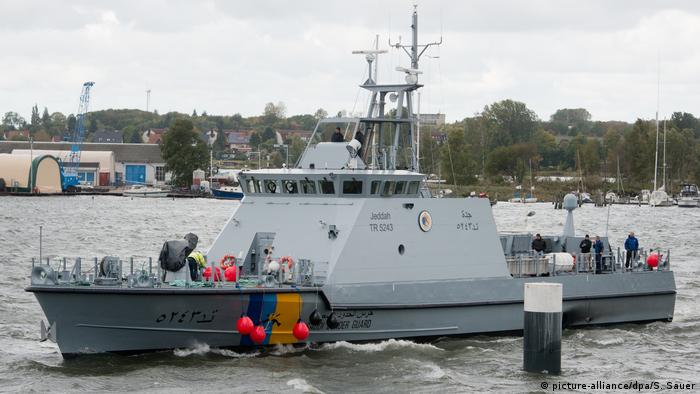 The German government approved nearly €450 million ($526 million) worth of weapons exports to Saudi Arabia and Egypt in the third quarter of 2017, more than five times the €86 million it sold in the same quarter of last year.

The German Economy Ministry disclosed the numbers after a member of parliament from the opposition Left party, Stefan Liebich, requested the information.

Egypt alone bought nearly €300 million worth of weapons, making it the number one export destination for German arms, while Saudi Arabia handed over nearly €150 million. By comparison, the two countries imported €45 million and €41 million respectively in the third quarter of 2016.

The ministry's disclosure did not give details on the types of weapons exported, but a large proportion of the sales to Saudi Arabia likely consists of four patrol boats and 110 military trucks. These sales were disclosed by the government in July, though neither the total value of the sales nor the individual value of each item were revealed at the time. It also remains unclear what Egypt bought, and Liebich has already filed a follow-up information request with the government.

Jürgen Grässlin, spokesman for the anti-arms trade campaign "Aktion Aufschrei — Stoppt den Waffenhandel!" ("outcry action — stop the arms trade!"), said the government does not like to disclose the value of individual deals but guessed that the huge sums were likely to be for armed boats. "And they always come with weapons and with ammunition, depending on how it's calculated," he said. 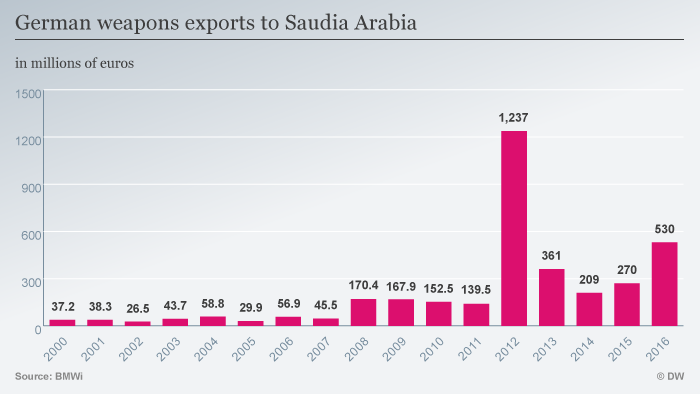 Feeding the war in Yemen

Liebich criticized the government's exports to both countries as "particularly reprehensible."

Saudi Arabia and Egypt have "to answer for the thousands of deaths from their dirty war in Yemen," he said, referring to the ongoing civil war between Houthi rebels and Yemen's government.

The Saudi-led coalition military intervention in Yemen has led to the death of nearly 10,000 people and created the world's biggest humanitarian crisis in one of the Arab world's poorest state. Human rights organizations have said the Saudi-led coalition may have commmitted war crimes, and the UN has warned some 7 million people face possible famine.

As Liebich pointed out, Germany's policies used to be more restrictive. "There were times when it was completely ruled out for Germany to deliver weapons to countries that were participating in wars," he said. "That only changed in the last two governments. It started with Turkey, which was sold weapons despite its war with the Kurds — that was a controversial discussion at the time."

"I know that the Greens have a different position on this, and they worked with us in the opposition," said Liebich. "I hope and expect that they assert themselves in the coalition negotiations and don't deliver into war zones anymore."

Grässlin was fairly skeptical that the Greens would be able to force a new policy on the government. "The Greens have very clear policies that you shouldn't send weapons to countries that violate human rights — that would definitely exclude Saudi Arabia and Egypt," he said. "The problem is the CSU has an interest in protecting the arms industry in Bavaria." 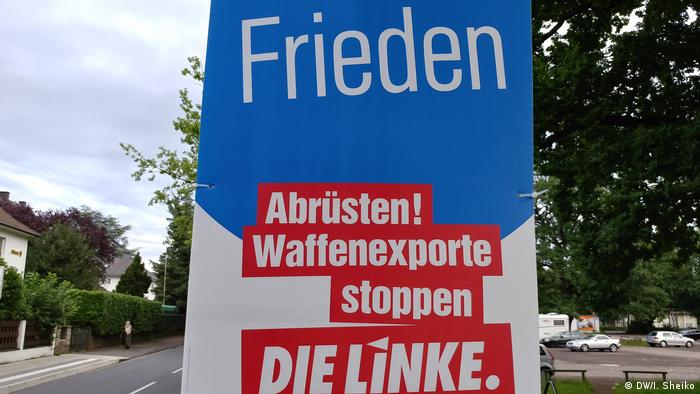 The Left party wants to halt all German arms sales, as seen on this election poster

In its answer to the Left party request, the Economy Ministry cautioned that the "sum of the approval values in a reporting period alone are no adequate measure for a specific arms export policy. What needs to be taken into account much more are the kinds of goods and their respective purpose."

"The government pursues a restrictive and responsible arms export policy," the ministry added. "The government decides on issuing approvals for arms exports on a case-by-case basis and in light of the situation after carefully assessing or drawing on foreign and security policy considerations."

Grässlin considered the ministry's response to be insubstantial. "Every government says that," he said. "The numbers always say something else. It's either barbiturates for the people, or pure hypocrisy, or however you want to describe it. It's an unbelievably unreliable arms export policy that constantly breaches its own guidelines."

"My counterargument is that if there are new approvals, there is still always the opportunity to say no," said Liebich. "That can mean you have to pay fees for breaking contracts — but then that's the way it is. I think it's more important that you don't sell weapons to a country that is taking part in a war which, according to the UN, is causing millions of people to starve."