Markets at first welcomed an EU 30-billion-euro emergency aid package for Greece - but got cold feet when Germany, Europe's largest economy expressed doubt that it should ever be used. 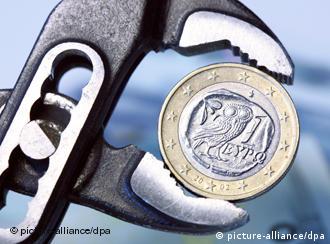 Germany says the aid offer should never have to be used

European markets initially took the news well that EU finance ministers on Sunday had approved a 30-billion-euro ($40 billion) emergency aid plan to help Greece meet its debt repayments. The euro, under pressure over the past week, also rose against the US dollar.

The value of the single currency fell however from 1.3692 dollars early on Monday to 1.3588 dollars later in the day (which was still slightly up on Friday) after Germany, Europe's strongest economy and the ultimate paymaster, insisted the plan was a stand-by facility only - and one that was best not used at all.

"The fact that a fire extinguisher has been mounted on the wall does not mean that it will be used," Chancellor Angela Merkel's spokesman, Christoph Steegmans, told a news conference in Berlin.

Germany is expected to provide 8.4 billion euros ($11.4 billion), more than a quarter of the amount, but said the 36-month loans at the announced rate of five percent rate would only ever be issued as a "last resort."

Greece has a 300-billion-euro debt mountain and faces bankruptcy if it defaults on its sovereign debt. Greece needs to borrow around 11 billion euros by the end of May to refinance maturing debt and interest charges. It will need 54 billion euros in total this year to cover its debts. 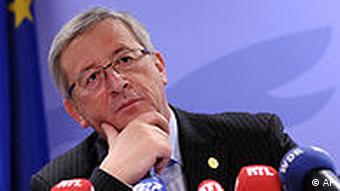 Who makes the final decisions?

Germany also raised concerns among investors by saying that any assistance must first be agreed to at an EU summit. Before this can happen, Greece's 15 partners in the euro zone much each pass a series of domestic political hurdles.

This is at odds with statements by the European Commission, and Jean-Claude Juncker, the head of the Eurogroup of euro zone finance ministers. Both have said that a decision to activate the assistance could be taken at ministerial level would be sufficient.

This contradiction raises questions as to how quickly the aid would actually be available should Greece request it. Athens has consistently said it hopes to be able to do without the loans.

EU officials said the International Monetary Fund could contribute an extra 15 billion euros in addition to the 30 billion euros. Preparatory talks for this possibility started in Brussels on Monday. Together with the 30 billion EU aid package, this could be the biggest financial attempts to rescue a country ever.

It is also not clear whether Greece can turn directly turn to the IMF for financial assistance. IMF chief Dominique Strauss-Kahn said the fund "stands ready to join the effort," but his officials have not spelled out conditions.

Markets say that in the short term, the aid package will help Greece buy time, but that's all.

"No aid package can address the underlying issues, “said Tammo Greetfeld, equity strategist at UniCredit in Munich. “The decision is no green light for medium term equity investments," he said.

On Tuesday the Greek government faces a key test of its credibility as it plans to issue short-term treasury bills worth 1.2 billion euros.

Demonstrators clashed with police in Athens on Thursday, as they protested against government austerity measures designed to lower the budget deficit. At least a million Greeks took part in a general strike. (12.03.2010)