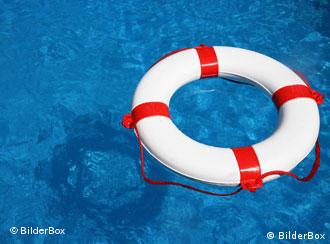 The euro-zone rescue package should calm the markets

Euro-zone ministers approved the terms of a 30-billion-euro rescue package for debt-ridden Greece should Athens be unable to finance itself. The International Monetary Fund (IMF) will also contribute at least 10 billion euros to the recovery fund in the first year.

After a two-hour telephone conference, finance ministers from the euro area said in a statement they were ready to provide financing via bilateral loans centrally pooled by the European Commission as part of a package including IMF financing.

Greece will be able to borrow from euro-zone governments and the IMF at an interest rate of five percent, significantly below market rates, said European Economic and Monetary Affairs Commissioner Olli Rehn. 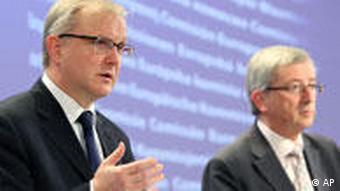 A Greek Finance Ministry official said the loan option will only be a final recourse and is primarilly designed to ease skeptism of Athens' ability to handle its 300 billion euro national debt.

Finance Minister Giorgos Papaconstantinou described the move by the euro-zone member states as a "sign of confidence" in Greece. The Greek minister stressed that Athens had not requested bilateral aid and hoped Greece would continue to be in a position to finance itself via the market.

The chairman of the euro-zone finance ministers, Jean-Claude Juncker, told a news conference in Brussels that the planned aid package was designed to help Greece meet its financial obligations.

"We call on the Greek government to implement all these measures in a rigourous and determined manner to effectively reduce the budget deficit by four percent in 2010," said Juncker, Luxembourg's prime minister.

"If the mechanism had to be activated, it would not be a violation of the no-bailout clause (in the European Union treaty) since the loans are repayable and contain no element of subsidy," he added.

Juncker said data provided by Greece suggested Athens was on track to reach its targets for 2010, as it tries to implement a strict fiscal consolidation program.

Eurogroup finance officials and central bankers have reached agreement on credit terms to Greece as the country's prime minister indicated that Athens may use the mechanism if necessary. (11.04.2010)

EU leaders have thrashed out the details of an EU-IMF rescue deal that was announced on March 25, according to news agencies quoting unnamed sources. European markets ended the week up on hopes of a detailed rescue plan. (09.04.2010)

The markets delivered a harsh blow to Greece and lending costs reached a record high as lenders fear Athens may default on its loans. But the head of the European Central Bank says that's not going to happen. (09.04.2010)