Germany beat Olympic-bound Australia in Wiesbaden despite four players being forced into COVID-19 quarantine shortly before kickoff. There were big performances from some new faces. 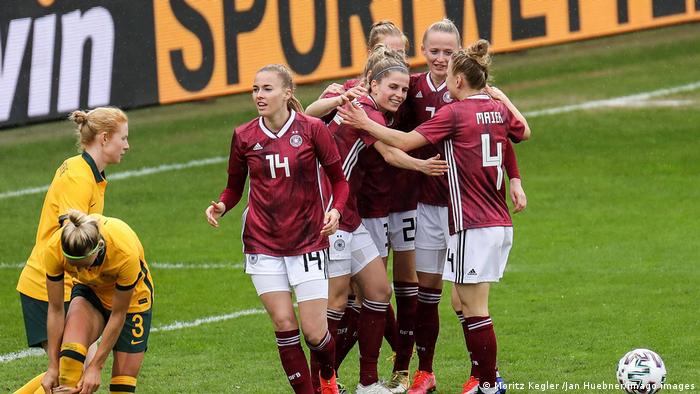 Germany's clash against Australia was meant to be an opportunity for the hosts to measure their mettle against another top side. Instead, increasingly common COVID-19 complications forced fresh faces to step up in the central German city of Wiesbaden.

Just hours before the match, Germany announced that defender Felicitas Rauch had tested positive for COVID-19, while teammates Lena Oberdorf, Sara Doorsoun and Svenja Huth had to quarantine despite testing negative because of their close contact to Rauch.

"We know that despite the protocols there is always a slight risk [of infection], but the timing of cases occurring on matchday is not ideal. It makes it harder to react, but the health authorities and medical team at the club did an excellent job to act quickly. Credit to them, and above all the players, who have handled it very well," said Germany coach Martina Voss-Tecklenburg after the match.

With talismanic midfielder Dzsenifer Marozsan unavailable for these games due to a raft of positive COVID-19 cases at her club Lyon, Germany had to adapt. Four of the host's starting 11 had five or fewer caps.

Despite their inexperience, Germany's youngsters never looked out of place. After a brief spell of Australian control, the hosts were dominant for the rest of the game.

"We did a good job of cutting off their attacks and limiting their chances, which was one of our goals prior to the match," said Voss-Tecklenburg.

Sjoeke Nüsken, winning her second cap, was a big part of that and even scored the opening goal. 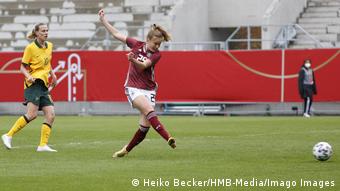 The 20-year old midfielder looked as comfortable as can be on the international stage. Nüsken elegantly dribbled out of space, sprang attacks with a number of perfectly-weighted passes, and harried her opponents along with her tireless partner in the center, Sara Däbritz.

The goal instantly robbed Australia of their snarl, and the young German side cruised on, never lowering their intensity. Much had been made of facing off against Sam Kerr prior to the match, but Jana Feldkamp, a surprise starter after Oberdorf was forced into quarantine, impressively handled one of the best strikers in the world.

"We said before the match we wanted to be brave and you saw it against today a top team. We didn't shy away despite their high pressure. We played our game, built out of the back and it led to our success," Laura Freigang told DW after the final whistle.

With a frustrated Kerr taken out of the match, Germany could focus on getting forward. First-half possession was converted into a second-half onslaught.

Substitute and debutant Jule Brand scored a mere three minutes into her Germany career before adding an assist two minutes later. If any of Germany's young core had nerves, they weren't showing.

Australia's relatively new head coach Tony Gustavsson cut an increasingly desperate figure on the sidelines. His imploring did little to aid Australia, and while his side hasn't played in a long time they still struggled with Germany’s unyielding pressing.

Even wholesale changes in the second half did little to throw the hosts off their rhythm. "Regardless of who was on the pitch we looked really good. Despite plenty of changes everyone played well, we all had fun and you could tell the desire was there," said Freigang.

After suffering their first defeat since 2019 at the hands of the Netherlands, Germany were desperate to test themselves against another top side. Despite a late COVID-19 crisis and a host of inexperienced players, this was a test Germany passed with flying colors.