Kathrin Hendrich is caught between two worlds. She will have fans on both sides of the border when Germany face Belgium on Sunday — but the defender has no regrets in choosing Germany over her country of birth. 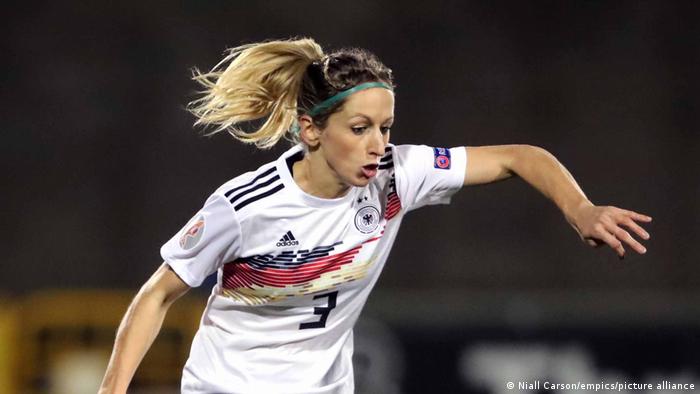 On Sunday Germany's Hendrich will face Belgium, the country where she was born.

When Germany international Kathrin Hendrich steps on the field against Belgium in Aachen on Sunday, the 28-year old will find a friend rather than a foe facing her on the opposite side of the pitch.

"Because of my story, my dual nationality, I have a special connection to Belgium," Hendrich said. "That's why the game will be special for me."

The match is just a friendly, but Hendrich's ties on both sides of the border run deep. She was born in Eupen, Belgium, located just 16 kilometers (10 miles) from Aachen. Her father is German, her mother is Belgian, and she played football in her birth country until the age of 14, first with her local club Eupen and then with Teutonia Weiden.

She made the jump to Germany in 2009 after joining second division Bundesliga side Bayer Leverkusen. When the club was promoted in 2010, the defender got her first taste of top-flight football. Her performances attracted the attention from both the Belgium and Germany national sides.

"I always watched the Germany national team on TV. We had German television and they always showed the games of the women's national team. Through that I had a special connection," she told reporters, including DW, at a recent press conference before the game. "I would always tell my mom and dad I would rather play for Germany and I stayed with my decision. I'm now happy that I took that road." 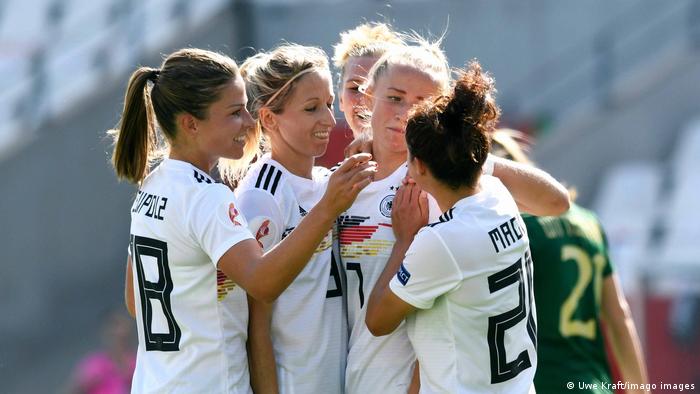 Hendrich, second from the left, has amassed 36 appearances for Germany.

It was a natural progression. Hendrich has also represented the Germany national youth sides but she kept tabs on the Belgium team and says they're no walkover.

"They've developed really well in the past years," she said. "We have to step on the gas. They won't make it easy for us."

Of course, Germany also won't make it easy for Belgium. The team is on a roll, having qualified for Euro 2022 with a perfect record last year. They scored 46 goals and only conceded once. But their recent tournament exits show that there is room for improvement.

That's where Hendrich comes into play. She's never really established herself as a star name, but she has the flexibility that continues to make her an attractive option for the team, capable of playing in defense and defensive midfield. Then there is her highly successful club career, winning almost every trophy there is to win. With Frankfurt she clinched the Champions League back in 2015 and then made the move to Bayern Munich before joining serial Bundesliga winners Wolfsburg last year.

Hendrich continues to catch the eye of top Bundesliga clubs, but, at the national level, she has remained on the periphery since her making her debut in 2014. She failed to make the final cut for the 2015 World Cup, and, despite being selected for Euro 2017, she only made one appearance. But, even with the ups and downs, Hendrich wouldn't have it any other way. 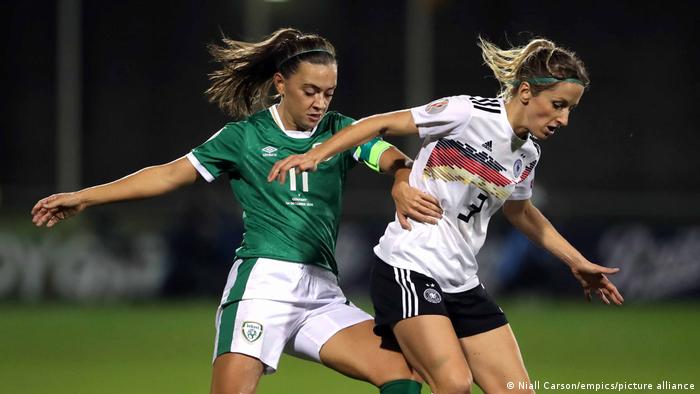 "I don't regret deciding to play for Germany," she said. "I've now been here for many years and I feel good here. This is a very strong team with a lot of young players that have huge potential, not to mention the seasoned and experienced players. It's an interesting mix. My decision was nothing against Belgium."

So close, yet so far

Pandemic travel restrictions mean that Germany's team will be without some of their top members playing outside the Bundesliga. That list includes Chelsea's Melanie Leupolz and Ann-Katrin Berger, Arsenal's Leonie Maier, Montpellier's Lena Petermann, and Atletico Madrid's Turid Knaak.

Though Hendrich will have family cheering on both sides of the border, under normal circumstances many of them would have made the short trip to Aachen. But the coronavirus pandemic has made that impossible.

This week's five talking points from women's football include Bayern being crowned winter champions, Bremen returning from quarantine, Duisburg being in trouble and Vivianne Miedema being overlooked – yet again.

Women's Euro: Germany aiming for much more than the minimum against Russia

Germany go into their final Group B match at the Women's Euro in the Netherlands needing only a draw to qualify. However, coach Steffi Jones has made it clear that nothing less than a victory will be satisfactory.