The top diplomats of Germany and France have said Turkey needs to reopen dialogue over its redeployment of a gas exploration vessel in the eastern Mediterranean or potentially face a tough response from the EU. 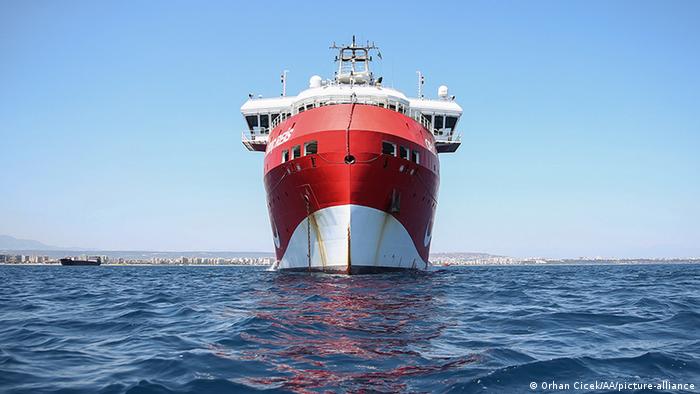 The foreign ministers of Germany and France on Thursday accused Turkey of provoking the European Union by continuing natural gas exploration in waters contested by member states Greece and Cyprus.

Ankara had removed a gas survey ship, Oruc Reis, from the eastern Mediterranean waters before an EU summit on October 2, during which EU leaders threatened to impose sanctions if Turkey didn't stop gas exploration.

However, this week Turkey redeployed the ship and said it would start a 10-day surveying operation south of the Greek island of Kastellorizo.

On Thursday, German Foreign Minister Heiko Maas said Turkey's "provocation" has made the agreed-upon process of dialogue on the maritime claims among Turkey, Greece and Cyprus impossible.

"This is more than annoying, including for us in our role as intermediaries,'' Maas said, adding that the dispute can only be solved with direct discussions, and that the EU response needs to be based on whether talks progress.

"If there isn't [progress], then the EU will have to face the question of how to deal with this and what consequences this will have,'' Maas said in Paris.

His French counterpart, Foreign Minister Jean-Yves Le Drian, said it was up to Ankara to take the initiative and that the EU is ready to change the balance of power if Turkey doesn't return to dialogue.

"It's clear to us that Turkey is permanently carrying out provocative acts which are unacceptable," Le Drian said.

In September, EU Council chief Charles Michel said the bloc would use a "carrot-and-stick" approach to address the gas dispute, saying the EU would "identify tools to use to improve the relationship" and tools that can be used if the EU feels it is "not being respected."

A leaders' statement said incentives would include closer ties and a better trade relationship if Turkey pursues "dialogue in good faith and abstaining from unilateral actions."

After the October 2 talks, the EU said it would review the possibility of sanctions on Turkey at another summit in December, whether this timeline has been sped up remains to be seen.

On Wednesday, Turkish President Recep Tayyip Erdogan accused Greece and Cyprus of failing to fulfill "promises'' made during negotiations within the EU.

"We will continue to give the response they deserve on the field, to Greece and the Greek Cypriot administration who have not kept their promises during talks," said Erdogan, without specifying what the "promises" were.

Greece's government has said it is impossible to hold talks on maritime claims while one of the parities carries out a survey mission.