Germany and France have proposed a meeting next week with Russia and Ukraine to quell violence in eastern Ukraine. A meeting last month led to a short deescalation in fighting. 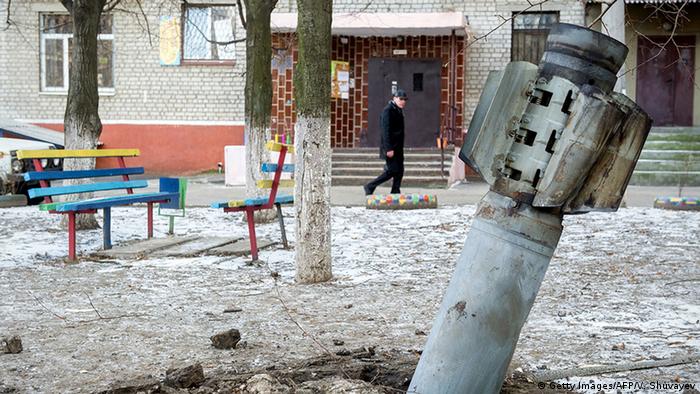 German Foreign Minister Frank-Walter Steinmeier told the Bundestag on Wednesday that he and his French counterpart Jean-Marc Ayrault had proposed a meeting with colleagues from Ukraine and Russia next Tuesday in the Belarusian capital, Minsk.

Germany last month hosted four-way talks under the so-called "Normandy Format" to make progress on the 2015 Minsk agreement and put a stop to escalating violence.

"There were significant improvements in the situation for a few days, perhaps two weeks, but now the security situation there is worsening again," Steinmeier said of the last meeting. "The cease-fire is being broken more frequently again."

The German and French brokered Minsk agreement put a stop to some of the worst violence between Ukrainian government forces and Russian-backed rebels in eastern Ukraine. But monitors from the Organization for Security and Co-operation in Europe (OSCE) continue to report near daily exchanges between the warring sides. Meanwhile, the political and security aspects of the deal, including Ukrainian government control over the eastern border and local elections, have stalled.

"Even if we don't succeed in finding the big solution now, such meetings and talks are necessary so that such a situation ... doesn't get out of control," Steinmeier said. "Even if it is difficult, even if it is tortuously slow, we must not break off our efforts to implement the Minsk agreement step by step."

It was unclear if Russia and Ukraine had responded to the proposal, but Interfax Ukraine quoted Foreign Minister Pavlo Klimkin as saying he had spoken with his German colleague about meeting on November 29.

Steinmeier said he hoped Ukraine and Russia would "assess the seriousness of the situation in a similar way to us" and "deliver visible contributions to a sustained easing of tensions."

Since the Ukraine conflict erupted in 2014 nearly 10,000 people have been killed. Russia's annexation of Crimea and support for rebels in eastern Ukraine has increased tensions between the West and Moscow.

On APEC summit sidelines, Obama leans on Putin over peace for Syria and Ukraine

In what could be their last official meeting, the Russian and US presidents have held talks on the sidelines of the APEC summit in Peru. Topics raised included the conflicts in Syria and Ukraine. (20.11.2016)

Estonia to get first female prime minister 3h ago