Germany wants rejected asylum seekers to voluntarily leave the country and aims to offer an incentive. The idea, outlined by Interior Minister Thomas de Maiziere, is meant to help with reintegration once back at home.

For years, Germany has provided rejected asylum seekers and others with financial help to return to their countries, including costs associated with travel and restarting life back home.

"When you voluntarily decide to return by the end of February, in addition to startup help you can provisionally receive housing cost help for the first 12 months in your homeland," de Maiziere said in a direct appeal to rejected asylum seekers.

According to the news report, in addition to previous payments rejected asylum seekers can receive money in their homeland for rent, building, home renovations or even basic equipment for a kitchen or a bathroom.

The program is called "Your country. Your future. Now!"

"There are opportunities in your homeland. We will support you with concrete help for your reintegration," de Maiziere said. 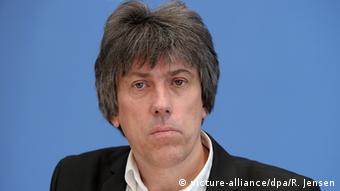 "[The government] is trying to entice people to give up their rights in the basest manner," managing director Günter Burkhardt told the German news agency DPA on Sunday.

De Maiziere's offer comes as Bavaria, which deports the most Afghans of any German state, reports problems in finding the people due to be sent back.

The Bavarian Interior Ministry told the weekly Welt am Sonntag that Afghans who discover that they are about to be deported often disappear days before their flight is to leave. It said it suspected that many of the planned deportees, most of whom it says are criminals, were receiving help from German pro-refugee groups to go underground.

Plans floated recently by state interior ministers from the conservative Christian Democratic Union (CDU) and its Bavarian sister party the Christian Social Union (CSU) to restart deportations of Syrians by mid-2018 have meanwhile met with opposition from other leading CDU politicians.

The head of the CDU/CSU bloc in the German parliament, Volker Kauder, told Welt am Sonntag that such deportations were "currently not an issue [for him] with regard to the security situation," adding, however, that "the situation has to be constantly reassessed."

Peter Altmaier, who is chancellery minister and refugee coordinator, also spoke out against the proposal, telling Bild am Sonntag, "The civil war is not over, and many people have fled from the Assad regime, which is still in power."

Altmaier said although many refugees had returned to Iraq, Syria's neighbor, "we haven't seen this development in Syria yet."

The deportation proposal, which has been put forward by the states of Bavaria and Saxony, has been approved for discussion at a meeting of interior ministers in Leipzig next week.

It has been severely criticized by the Social Democrats, the Greens and the Left party.