Federal prosecutors have said the so-called Group S sought to "rock and ultimately overturn the state and social order" of Germany. 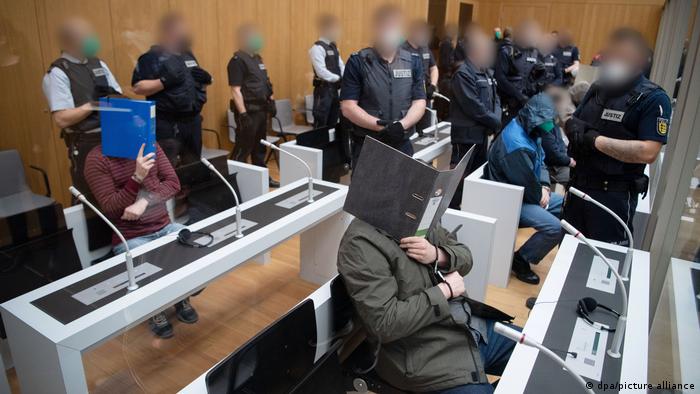 Twelve Germans went on trial on Tuesday, suspected of plotting deadly attacks on Muslims, asylum-seekers and political enemies with the aim of fueling civil unrest and overthrowing the government.

Federal prosecutors in the southwestern city of Stuttgart accused eight suspected members of the so-called Group S of founding a "terrorist organization" in September 2019.

The far-right group is led by suspects identified only as Werner S. and Tony E, according to prosecutors. Their full names weren't released for German privacy law reasons.

Three others were accused of membership in the terrorist organization, while the 12th defendant is charged with supporting the group.

Prosecutors said several members of the group sought to "rock and ultimately overturn the state and social order of the Federal Republic of Germany" with plans to spark "a civil-war-like situation ... via as-yet undefined attacks on politicians, asylum seekers and people of Muslim faith."

Is Germany seeing a rise in far-right extremism?

The alleged "Group S" members, who were arrested in February last year, allegedly possessed firearms, axes and swords for the planned attacks. All members are German citizens.

The trial, which is expected to last until August, comes amid growing concerns in Germany over a surge in violent right-wing extremism.

According to provisional police data released in February, in 2020 the number of crimes committed by far-right suspects in Germany surged to its highest level in at least four years.

In February 2020, a far-right extremist killed nine people and injured five others when he opened fire on two shisha bars in the central German city of Hanau. The slaughter marked the single deadliest racially motivated attack in post-war Germany.

In October 2019, a neo-Nazi murdered two people in an attack on a synagogue in the city of Halle on the Jewish holiday of Yom Kippur.

The trial of the NSU right-wing terror cell took over four years. DW answers five key questions from one of Germany's most high-profile neo-Nazi cases.