The German government has given the green light for arms shipments worth over €1 billion so far this year to the Saudi-led coalition fighting in Yemen. The approval comes despite export restrictions being in place. 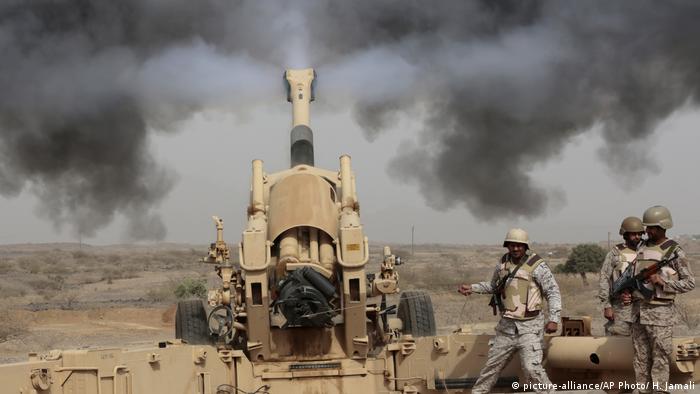 The German government has approved more than €1 billion ($1.1 billion) this year in defense exports to members of the Saudi-led coalition directly involved in the war in Yemen, German news agency dpa reported, quoting a document from the country's Ministry for Economic Affairs.

It showed that Berlin approved 56 defense export deals between January 1 and June 5, including €801.8 million worth of exports to Egypt and €26.1 million worth of exports to the United Arab Emirates (UAE). According to the document, Berlin also approved two defense deals with Saudi Arabia during the period, despite a ban. Ulrich Nussbaum, a senior official in the ministry, said the deals included €831,000 worth of armored vehicles.

The document was issued by the ministry in response to a request for information by Omid Nouripour, a lawmaker belonging to the opposition Green Party.

The rebels are being backed by Iran. The conflict has triggered what the UN describes as "the biggest humanitarian disaster in the world."

Not everyone, however, welcomed the German ban on arms exports. France and the UK, for instance, have pressed Germany to lift restrictions. Both countries have criticized that the Saudi weapons freeze also bars sales of arms manufactured outside Germany that happen to have German components in them.

Paris said that Berlin's arms export policy and complex licensing rules threatened future bilateral defense projects. The pressure from Britain and France forced Germany to partially lift its ban, particularly with regard to exports of weapons with German components.

There is also evidence that Germany's arms export controls are ineffectual: In February, investigations by DW and others revealed that German weapons were being used in Yemen, despite the controls.

A report released by the Sweden-based Stockholm International Peace Research Institute (SIPRI) in March showed that Saudi Arabia bought more weapons from abroad than any other country in the world, accounting for 12% of global arms imports.

Germany, meanwhile, increased its international arms sales by 13% between 2009–13 and 2014–18, according to the report, with German-built submarines enjoying particularly strong demand abroad.

Germany and the United Arab Emirates have extended their multibillion-euro partnership during a meeting in Berlin. Opposition Greens decried the UAE's role in the Yemen and Libya conflicts, and Sudan's turmoil. (13.06.2019)