German exports decreased again in the first quarter of this year — a decrease of 7.4 percent from the same point last year. Germany's Economy Ministry cites a "restrictive and responsible" export policy as the reason. 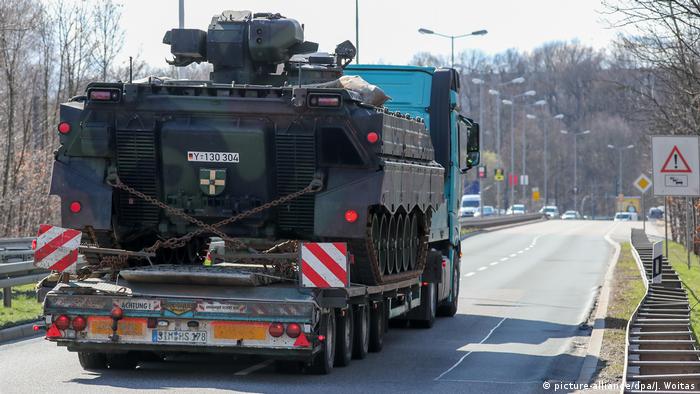 The German government approved arms exports worth €1.12 billion ($1.3 billion) in the first quarter of 2019, Germany's Economy Ministry reported on Tuesday.

The value is a 7.4 percent decrease from the same period in 2018 and €100 million below last year's quarterly average. The industry last reported an increase in 2015, when it recorded exports of €7.86 billion.

Among the 20 main customers cited by the ministry, none are directly involved in the Yemen war. The German government partially banned exports to countries involved in the war in Yemen. That ban was further tightened in November following the murder of journalist Jamal Khashoggi in the Saudi consulate.

The ministry attributed the drop to a "restrictive and responsible arms export policy," adding that the human rights situation in the importing country played a prominent role in the decision making process.

The ban only applies on new orders, not those already approved, but Germany is pushing to ban domestically produced arms from being used.

The figures were released in a response to a parliamentary question by Green lawmaker Omid Nouripour.

The largest buyers of German military equipment in the first quarter of 2019 were the United States and Britain — exports worth €169 million and €157 million respectively.

The Middle East can't get enough of America's big guns, according to a new report. German-made weapons, particularly submarines, were also a hit with foreign buyers in recent years. (11.03.2019)