Foreign Minister Guido Westerwelle has asked his Greek counterpart to wait for the latest report from the so-called "troika" of financial overseers before considering changes to the country's austerity targets. 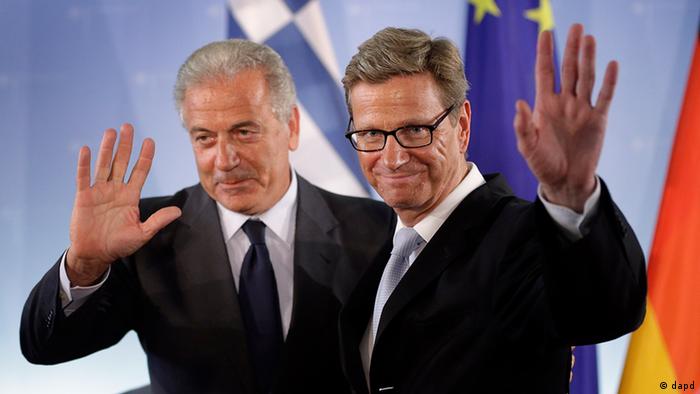 Guido Westerwelle told reporters in Berlin on Monday that hasty decisions would not solve Greece's economic problems, advising that any changes in policy should not take place before the next report from the so-called "troika." A joint report on Greece from the European Commission, the European Central Bank and the International Monetary Fund is expected to be published as soon as September.

"You don't form a judgement until you have the facts," the German foreign minister said after meeting his opposite number from Athens, Dimitrios Avramapoulos.

Westerwelle also said that the German government considered any "substantial softening" of the austerity measures tied to Greece's emergency loans to be unfeasible, adding that the key to Greece staying in the eurozone lay in Athens. 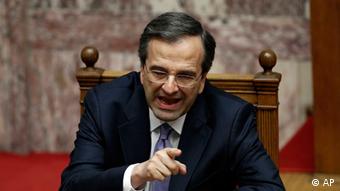 Chancellor Angela Merkel is to meet with French President Francois Hollande and Greek Prime Minister Antonis Samaras in Berlin at the end of the week, a development that had prompted speculation about a possible new deal for the government in Athens. The chancellor's spokesman, Steffen Seibert, told reporters on Monday that it was "not to be expected" that "major decisions would be made" at the meeting. Monday's meeting was meant, at least in part, to lay the groundwork for the Friday appointment.

Greek Foreign Minister Avramapoulous did not call explicitly for changes, but warned about the potential backlash from far-reaching cuts in public spending.

"A cost-cutting program without liquidity and incentives to growth will lead to more unemployment," Avramapoulos said.

The two ministers displayed a more united front on the dangers of rhetoric and north-south friction within the eurozone amid these economic threats. 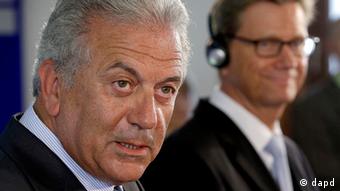 Avramapoulos said that Greeks were unhappy with their current lot

"We are both convinced that we have to push back against the anti-European populism in Europe," Westerwelle said. "The situation in Europe is too serious for us to be playing with fire."

Mutual resentment exists around the bloc, most visibly in the popular press - either about the emergency loans granted to primarily southern European countries like Portugal, Greece, Cyprus and Spain, or about the stringent conditions placed on the funds by major EU powers like Germany and France. Italian Prime Minister Mario Monti was one of the first leaders to explicitly warn about a potential divide earlier this month.

Avramapoulos agreed that politicans needed "to overcome the stereotypes," but admitted that his government was struggling to convince the general population that biting austerity measures would help them in the long run. Greece is heading for its fifth consecutive year of recession, with the Bank of Greece predicting a 4.5 percent contraction of gross domestic product in 2012 - on the back of a 6.9 percent slump in 2011.

"If we can win over the public to our side, we will have made a major step towards the success of these reforms," Avramapoulos said in reference to the cuts his government is trying to implement.