Multiple channels belonging to a prominent German coronavirus-denier have been blocked, while a man in Bavaria is under investigation for spreading antisemitic content on the platform. 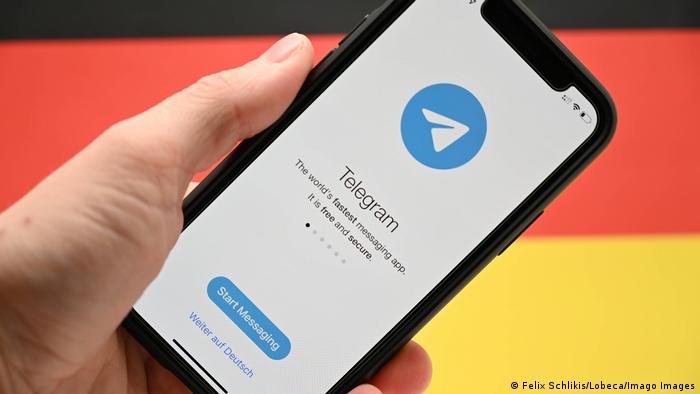 The Telegram app was initially launched in 2013

Several channels belonging to radical coronavirus conspiracy theorist Attila Hildmann were blocked as of Wednesday for having "violated local laws." The notice appears on both the mobile and desktop versions of the app.

Moreover, Josef Holnburger, a researcher at the Center for Monitoring Analysis and Strategy nonprofit, tweeted that a channel tied to Hildmann with over 63,000 users is still unrestricted. The group often promotes false information related to COVID-19 vaccines.

Last year, a channel run by Hildmann with over 100,000 users was blocked, with the conspiracy theorist decrying the move as censorship.

Hildmann, who came to prominence as a vegan chef, has previously called for violence against the German state. He has also made numerous antisemitic statements.

The 40-year-old moved from Germany to Turkey in early 2021 after a warrant was issued for his arrest. Hildmann, who holds both German and Turkish citizenship, is unlikely to be extradited to Germany and face the justice system.

Meanwhile, police in the southern German state of Bavaria on Wednesday searched the home of a man spreading antisemitic content on the platform. The authorities confiscated the hard drives of the 59-year-old, who is suspected of hate speech and Holocaust denial.

The man operated a Telegram channel that had over 800 members. In addition to hateful content, the posts in the group suggested violence against German authorities.

A police spokesperson said the man cooperated with authorities and agreed to be taken to a police station. If found guilty of Holocaust denial, the man could be punished with up to five years in prison.

Telegram contributes to 'spiral of radicalzation'

German researchers have found that extremists are using Telegram more frequently to spread hateful messages and gain new followers. A study in December by the Institute for Strategic Dialogue Germany found Telegram contributes to a "spiral of radicalization."

"Power users" such as Hildmann and far-right Austrian Identitarian Movement leader Martin Sellner are able to express themselves more freely on Telegram than more established platforms such as Facebook or Twitter and can attract a massive following, study co-author Christian Schwieter told the Funke media group.

In January 2018, the Network Enforcement Act was implemented by the German government, which forces large social media giants to remove illegal content or face a fine. Yet, researchers found alternative platforms such as Telegram are able to evade these reporting requirements.

Schwieter suggested that German authorities put more pressure on foreign companies such as Telegram, which is based in Dubai. It should also be made easier for users to report illegal content on these platforms.

The eastern German state of Saxony on Wednesday called for the federal government to more efficiently prosecute criminal offenses on social networks. Saxony Media Minister Oliver Schenk said the government should ascertain whether messenger services such as Telegram fall under the auspices of the Network Enforcement Act.

Peter Beuth, the interior minister of the western German state of Hesse, had earlier made a similar request to the federal government.