Germany considering use of military aircraft to deport refugees

Berlin is looking at the use of military transport vehicles to send refugees back to their countries of origin. The government has been mulling ways to speed up the deporation process. 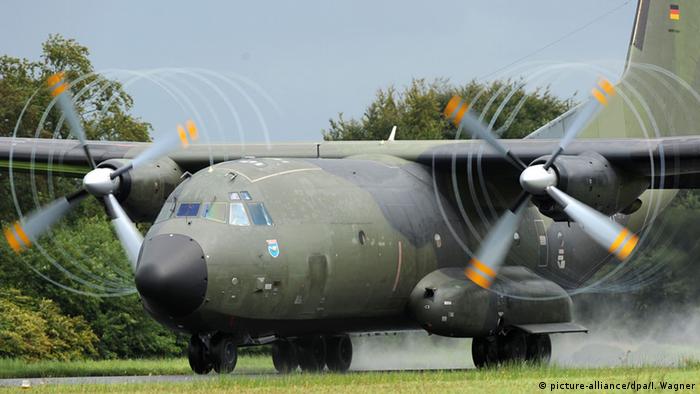 The German government is willing to use army vehicles to ship refugees back to their homelands, German Defense Minister Ursula von der Leyen said on Wednesday.

The story broke earlier the same day, when German newspaper Bild reported the government was looking into the use of Bundeswehr aircraft as one way in which federal and state governments could deport asylum seekers whose applications had been rejected.

"Obviously, the usage of the Transall (Army transport aircraft) is not ruled out," von der Leyen confirmed. "But only in the event that all civilian transport capacities are exhausted and if it does not affect the German army's priority missions."

The news comes as Berlin searches for ways to speed up the deportation process in an effort to ease the burden on local governments struggling to cope with Europe's largest refugee crisis since World War II. The country says it's expecting more than 800,000 refugees this year.

According to the article in Bild, the number of asylum requests in Germany is currently far greater than the number of deportations.

While many of the refugees arriving in Germany are fleeing war in the Middle East, as many as a third are considered economic migrants and are likely to be deported.

Refugees welcome – but then what?

German Chancellor Angela Merkel has traveled to Turkey to meet leaders and hash out a plan aimed at managing the migration flow into Europe. It may include an aid package and revitalized EU membership talks for Turkey. (18.10.2015)

A German police union chief has called for a fence to be built along the country's border to stem the flow of migrants. Rainer Wendt told the "Welt am Sonntag" newspaper that other countries would then follow suit. (18.10.2015)

An independent candidate to be mayor of Cologne has been severely injured in a knife attack. Police said four other people were hurt at the scene, and a suspect was taken into custody. (17.10.2015)