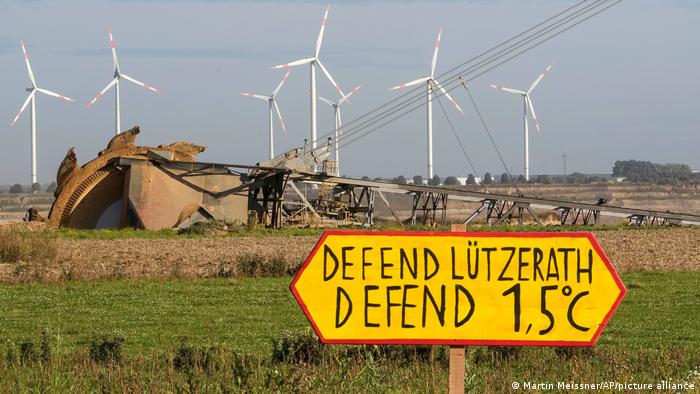 Activists say Germany needs to stop coal mining earlier if it is to play its part in limiting global warming to 1.5 degrees Celsius

More than 20 climate activists blocked roads and chained themselves to giant excavators on Friday in a bid to halt the expansion of an opencast coal pit in the western German state of North Rhine-Westphalia.

The protesters climbed onto the diggers and bucket wheel excavators in the Garzweiler lignite mine in the early hours of Friday.

Many of them camped near the mine in front of a village nearly abandoned and scheduled for demolition to make space for the expansion of the coal pit.

The protesters set up  makeshift tents to block workers from felling surrounding trees in preparation for the mine expansion.

Some activists occupied the heavy machinery and managed to put an English-language banner on its crane arm that read: "Keep it in the ground." 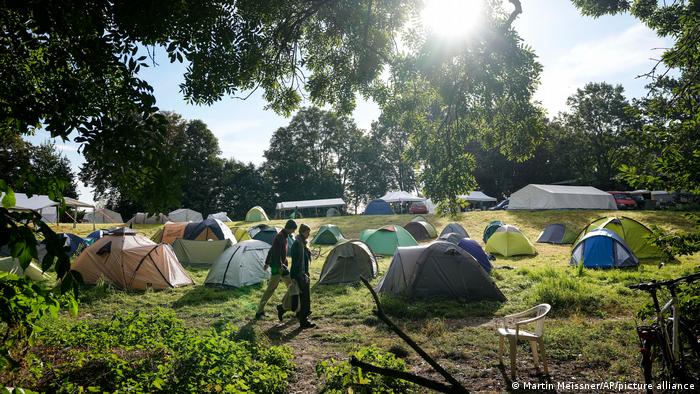 Police were able to remove eight of them, a spokesperson said, adding that the demonstrations were peaceful.

Garzweiler, operated by utility giant RWE, has become the focus of environmental groups in Germany who want to stop coal extraction as soon as possible.

The protest on Friday was organized by the environmental group Alle Dörfer Bleiben (roughly All Villages Should Remain),which is a reference to the various settlements being cleared to make space for extracting the coal. 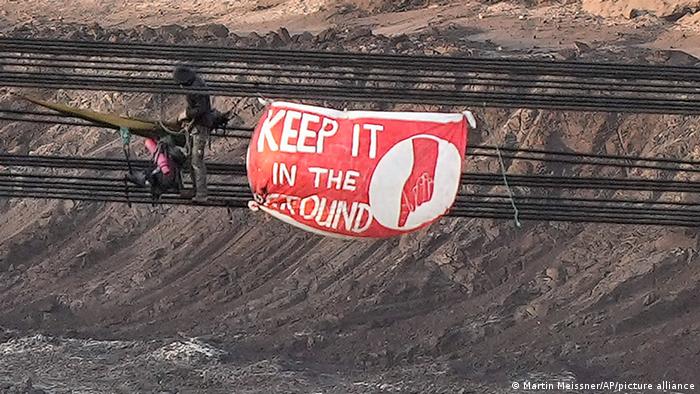 Protesters put a banner at the Garzweiler open-cast mine that read: "Keep it in the ground"

The village of Lützerath — the site of Friday's protest — is set to be next.

"1.5 C means: Lützerath stays!" read a large banner on a house that was still inhabited by local residents.

"There are clear studies that if Germany would want to keep to the carbon budget which they agreed to in the Paris Agreement, they could not continue to excavate this coal pit," activist Carola Rackete, better known for her activities at sea trying to rescue migrants, said in a video message.

"If [the expansion] happens, there's no chance of staying within 1.5 degrees," said activist Alexandra Brüne of Alle Dörfer Bleiben, referring to the target of limiting climate change to a 1.5-degree Celsius (2.7 F) increase in global average temperatures since preindustrial times.

The protests have been going on for almost a decade, with the clearance of demonstrators from their treetop structures in the nearby Hambach Forest in 2018 and again in 2020 probably grabbing the most attention. However, the issue of coal and coal power has been pushed back into focus as a result of the German election and amid the prospect of the ecologist Green party perhaps entering a new coalition government.

The German government currently plans to stop using coal to generate power by 2038. It had to ramp up and extend coal-mining activities in response to its earlier-than-intended halt to the use of nuclear power, scheduled to shut down entirely by the end of 2022.

Ahead of COP23, hundreds of anti-coal activists have defied police barriers at the Hambach coal mine in Germany — Europe's largest CO2 emitter. Protesters say climate change cannot be minimized without a coal phaseout.