An estimated 23 churches in Germany continue to use bells that feature Nazi symbols and inscriptions. One man is taking legal action against six Nazi bells used by the Evangelical Church in Central Germany. 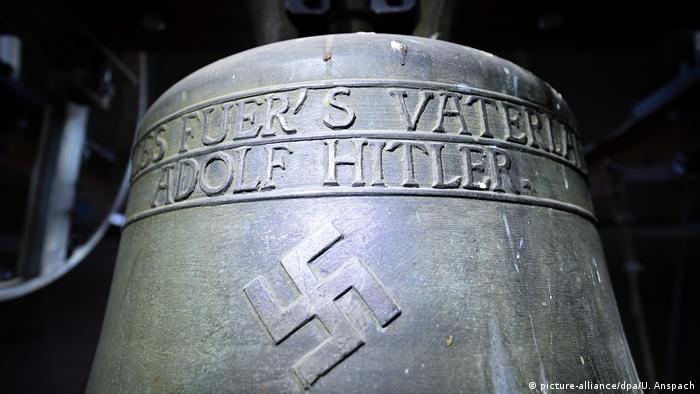 The Evangelical Church in Central Germany has been accused of violating a ban on the use of Nazi symbols by continuing to use church bells emblazoned with Nazi inscriptions, public prosecutors in the central state of Thuringia have said.

The criminal complaint accuses the church of using six bells in five churches throughout Thuringia, including on International Holocaust Remembrance Day. The unidentified plaintiff says he repeatedly asked the church to stop using the bells, but was ignored.

The criminal complaint was filed on February 2, Chief Public Prosecutor Hannes Grünseisen said, adding that his office was examining whether to investigate the allegations.

A church spokesman told the KNA news agency that regional leaders had written to churches using the bells and organized a meeting in April to discuss the issue.

The Nazi symbols and inscriptions could be removed, but such a move would need to be reconciled with rules on the preservation of historical monuments, spokesman Friedemann Kahl said.

"The bells concerned are not publicly accessible," he said. "We are confident that we'll find a good solution."

Thuringia's state Jewish association had called attention to the six Nazi bells in late January. In an interview with the daily Thüringer Allgemeine newspaper, Reinhard Schramm, who chairs the organization, said the continued of the bells was "painful" for Jews and bordered on "historical amnesia."

The state's finance minister and vice premier, Heike Taubert, said Thuringia could help finance the installation of replacement bells if churches decided to do away with their Nazi ones.

"Nazi bells belong to the dark side of our history," she said. "I don't make much of concealing their location or altering them."

'Everything for the Fatherland'

The plaintiff told KNA that he had also filed a criminal complaint against the town of Herxheim am Berg in western Germany after it allowed a local church to continue using a Nazi bell.

The town council said the bell, which features a swastika and the inscription "Everything for the Fatherland — Adolf Hitler," was "a memorial to violence and injustice."

The plaintiff, a relative of Nazi victims, said the decision amounted to a "mockery of the victims of Hitler's terror."

A regional court ruled two weeks ago that the church could continue using the bell.

At least 23 Nazi bells were still hanging in churches throughout Germany last year, according to a survey by Der Spiegel magazine.