An old church bell has ignited a debate in the town of Herxheim am Berg. The problem? It's inscribed with a swastika and Hitler's name. The town's mayor, however, told DW the bell won't be going anywhere any time soon. 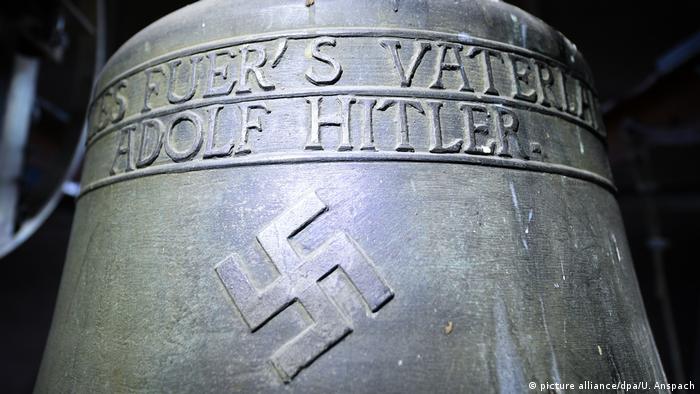 Scrubbing away hate: one Berliner's cleaning campaign against far-right graffiti

Irmela Mensah-Schramm removes Nazi and other far-right symbols from public spaces in German cities. But the 70-year-old Berlin resident is in trouble after a court charged her with damaging public property. (01.06.2017)

Scientists have found a high rate of tumors in flatfish in the Baltic Sea that could be linked to old munitions. Weaponry dumped in the sea at the end of World War II is leaching chemicals toxic to fish - and people. (17.05.2017)

The German army has been rocked by widening revelations about far-right sympathizers in its ranks and a lingering devotion to the Nazi-era Wehrmacht. So how does the Bundeswehr deal with its history? (16.05.2017)

The gate will be displayed in a museum on the grounds of the former Nazi concentration camp in Dachau. It was stolen under mysterious circumstances in 2014 and resurfaced in December after an anonymous tip. (22.02.2017)

For decades, the bells at Herxheim am Berg's oldest church have been ringing in Christmas, Easter and confirmation services. The recent revelation that one of those chimes comes from a Nazi-era relic is making some in the area, situated in the western state of Rhineland-Palatinate, very uncomfortable.

The bronze bell in question, which is over 80 years old, is inscribed with a swastika and the phrase: "Everything for the Fatherland - Adolf Hitler."

The town website details the history of St. Jacob's Church, from it's founding in 1014 to the celebration of its 1,000th anniversary in 2014.

One timeline entry notes that in August 1934, the village school teacher set fire to the church and that by December of the same year, three new bells were placed in the tower.

The "Hitler bell" was one of them, but the website doesn't mention the swastika or the Nazi inscription. Considering that the bell is ensconced behind thick stone in the belfry, it's likely that visitors to the town are completely unaware of its presence.

Backlash over continued use

A former organist at the church, Sigrid Peters, only recently learned of the bell's inscription and is calling for it to be switched off immediately. 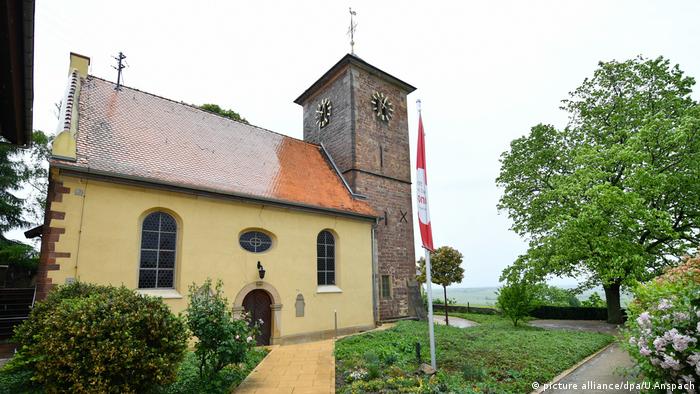 The 'Hitler bell' is ensconced behind thick stone in the tower at St. Jacob's Church

"It can't happen that a baby is baptized and a bell with the words 'everything for the Fatherland' is chiming," she told news agency DPA.

She was also disturbed by the fact that numerous couples around the state of Rhineland-Palatinate come to the picturesque church to get married every year. "They don't know at all" about the bell, Peters said.

Bell 'wasn't a problem before'

The Mayor of Herxheim am Berg, Ronald Becker, told DW that the existence of the bell is common knowledge around the village.

According to Becker, "it was already widely known" among local residents that a bell bearing the name "Adolf Hitler" existed within the stone steeple of the town's ancient church. 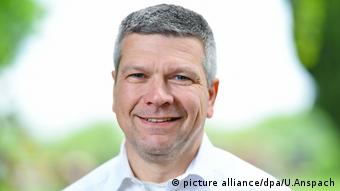 Becker, who has been mayor for three years, was concise when asked whether or not the bell was problematic.

"There wasn't a problem before and there won't be a problem with it in the future, either," he said.

Becker noted that bell was a "historic relic," but that it was important to understand and respect the history surrounding it.

The mayor also dismissed some proposed solutions to classify the bell as a WWII memorial or to install a plaque, informing visitors of the Nazi-inscribed bell's presence.

He said he doesn't want Herxheim am Berg to become "a cult site" where people - most likely of the far-wing persuasion - visit the church for the "wrong reasons."

Since this particular bell doesn't belong to the church, but rather to the municipality of Herxheim am Berg, politics will ultimately decide the bell's future. And Becker sees no need to remove it.

"I have the backing of the town," he explained, adding that Herxheim am Berg's nearly 800 residents "support me."

"It is closed in the church tower and it will remain so," Becker said.