In an act of "Spring cleaning," Nazi insignia on a church bell in Schweringen has been anonymously removed. Church leaders had decided to let the Hitler-era bell ring out once again, but the decision raised objections. 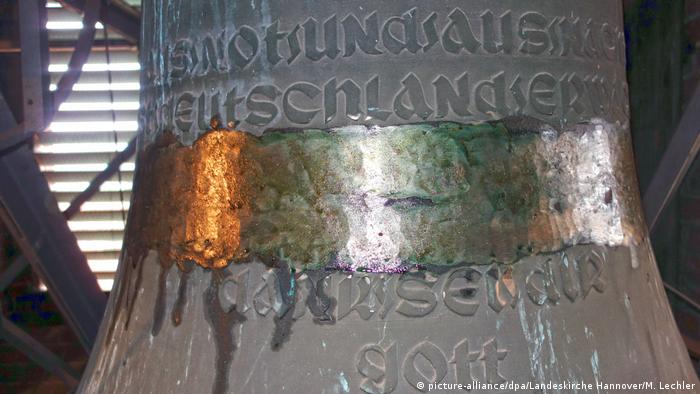 A Lutheran church in the northern German city of Schweringen said Tuesday that a swastika and a Nazi-era inscription had been removed anonymously from its church bell following a monthslong debate over how to deal with the controversial relic.

The Schweringen church pastor, Jann-Axel Hellwege, discovered last Thursday that the swastika, the symbol of Adolf Hitler's National Socialist party, had been removed from the bell, a statement from the regional Lutheran parish of Balge said. The phrase accompanying the swastika, "This cross provides success and conquers discord," had also been removed.

A note left on the church door claimed responsibility for the action.

Local newspaper Die Harke published a picture of the note, which bore the heading "Spring cleaning 2018."

"It was time that spring cleaning brought a fresh breeze to the town," the note said. "We not only cleaned the town, but the bell: from pigeon filth, from the filth of National Socialism, which was threatening after 80 years to divide the people of this village."

Heated debate over the Nazi-era bell

The bell, which currently hangs in the church's tower, had been the subject of intense discussion over the past months following its discovery in September 2017.

After temporarily silencing the bell, church officials from Balge, the parish to which the Schweringen church belongs, decided in mid-March to put the bell back in use rather than replace it. However, objections to that decision raised by Hellwege halted the plans for reuse.

The pastor's objection remains under consideration.

Bells bearing inscriptions and Nazi symbols were installed in many German churches after the Nazis came to power in the 1930s. While some today argue that the bells — and other Nazi-era artifacts — should be removed to prevent them from drawing neo-Nazi visitors, others argue that the bells must remain in place to testify to Germany's destructive totalitarian past.

'Facts have been created' 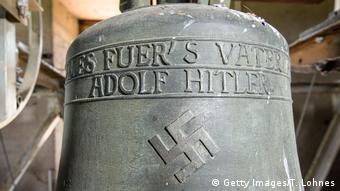 Several other church bells in Germany bear Nazi slogans, including this one in Herxheim

The note taking responsibility for the damage to the Schweringen bell alluded to the controversial decision to reinstitute the bell, saying that town's "respectable, intellectual and cosmopolitan citizens" could not stand idly by while division grew. "That's why we created facts," the letter read.

The Balge parish's statement announcing the damage to the bell stated that, given the long debate and contested decision to reintroduce the bell, it was possible to understand why "facts have now been created."

But, the statement added, church figures still had a duty to continue working through the history of the Schweringen bell.

The church said it was looking into how to proceed with the damage to the bell, including whether the removal had affected the bell's sound. It would also consider whether to take any legal action.

Schweringen is not the only German town where a Nazi-era bell has raised controversy: the town of Herxheim in the state of Rhineland-Palatinate also decided at the end of February after a village vote that a bell bearing the inscription "Everything for the Fatherland — Adolf Hitler" should remain in its church tower and be put back into use.

An old church bell has ignited a debate in the town of Herxheim am Berg. The problem? It's inscribed with a swastika and Hitler's name. The town's mayor, however, told DW the bell won't be going anywhere any time soon. (07.06.2017)