Germany checks one NATO box, leaves another open | Germany | News and in-depth reporting from Berlin and beyond | DW | 08.04.2022

Berlin has committed itself to the alliance's guideline of spending 2% of total national GDP on defense. But how the country meets a second, lesser-known benchmark could be the more important question. 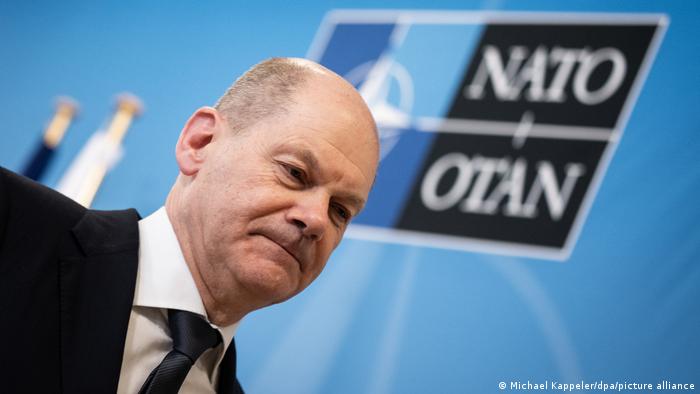 Gun-shy Germany was long an embarrassment to its security establishment, and an annoyance to more than one US president. Ambassadors from Washington have, with varying levels of finesse, pressed their German counterparts to get serious about defense.

It's one task US President Joe Biden's new top diplomat in Berlin, Amy Gutmann, may not need to concern herself with as much. She was just settling in here when Russia's invasion of Ukraine did more to change German security and foreign policy than many years of nudging from allies.

"It was a remarkable coincidence," Gutmann told an audience at Berlin's Free University this week. "One of my goals was to urge Germany to get to 2% NATO commitment: check."

NATO members agreed in 2014 to put 2% of their GDP towards national defense within ten years. Germany was slowly making its way to that threshold, but through 2021 remained one of the only major economies still falling short, according to NATO documents.

In his address last month to the Bundestag, Germany's parliament, Chancellor Olaf Scholz pledged to address that shortcoming, starting with €100 billion ($110 billion) in extra spending for the armed forces.

"It is quite certainly something that a country of our size and our significance within Europe should be able to achieve," he said.

Another spending guideline from the 2014 agreement has received less attention. That sees allies committing 20% of their annual defense budgets to "major new equipment." Here, too, Germany has been a laggard — one of just four NATO members still not hitting the mark. 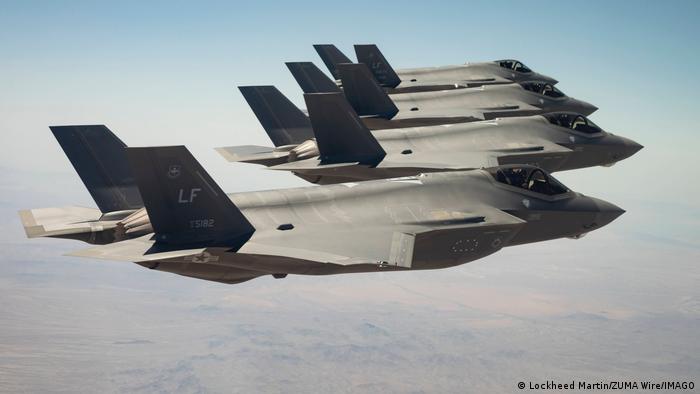 Scholz did not explicitly mention the second guideline, but the political discussion in the weeks since has focused on big-ticket items such as the nuclear-capable F-35 attack aircraft, Israeli-made missile defense, and armed drones.

"This is all about investment in hardware, because we've been under-serving and under-equipping and underfunding everything that flies, swims and moves," Thomas Kleine-Brockhoff, the German Marshall Fund's vice president, told DW. "I would say the 20% [benchmark] is probably a minimum."

The simplicity of the GDP target has helped make it the bigger talking point, he added, but it's the equipment target that ensures money goes into "real investments."

Soldiers' salaries, social contributions and pensions regularly take a big bite out of budgets. Of Germany's nearly €47 billion ($51.3 billion) defense budget last year, more than €15 billion ($16.8 billion) went to those kinds of payments, according to government figures. Around €8 billion ($9.1 billion), or 18.5% of total spending, went into equipment procurement.

Making the euros add up

While Germany is now on record to meet the GDP guideline, the government has been more reluctant to tie itself to the equipment one.

"As a rule of thumb, an investment budget should be around 20% to maintain our capabilities," Arne Collatz, a defense ministry spokesperson, said in response to a DW query. "But that isn't any kind of fixed rule. The investment portion regularly changes within the annual tranches of spending."

The hesitation may have to do with uncertainties surrounding the €100 billion. The top up, equivalent to about one-fifth of the entire annual federal budget, was the result of Scholz's quick-fire policymaking. The legislative approval process is now playing catch-up.

If the government gets its way, the outlay will fall outside the regular budget and therefore be exempt from constitutional debt limits. That means borrowing the money as an "investment," without touching tax rates or increasing official spending, at least on paper. These are red lines for the neoliberal Free Democrats (FDP), the smallest partner in the governing coalition and the one that controls the all-important finance ministry.

Scholz's cabinet submitted a bill to that effect to the Bundestag last month. It foresees the €100 billion as a "one-off supplemental appropriation" over five years to "finance particularly significant and complex, multi-year equipping plans for the armed forces."

The plans are a nod to NATO's 20% guideline on equipment. For NATO's other mark, it's the five-year timeline that is notable. Based on current GDP, supplementing each year's official defense budget with another €20 billion ($21.83 billion) gets Germany over the 2% finish line.

Such accounting tricks may be useful politically, but they risk undermining the point of the spending in the first place. Major military projects, such as Europe's next-generation fighter jet spearheaded by Germany and France, can take years to develop. It remains unclear what happens if the extra money runs out by 2026 and regular budgets don't go up much.

"If you want to buy gear, you need to have long-term reliability on the budget," the GMF's Kleine-Brockhoff said. "Then what in four years? Are they then willing to increase the defense budget by 25 billion a year? That would then require another political lift."

With general elections in 2025, that's a lift likely for the next government to undertake.

Even without the extra money, the German military has struggled to spend efficiently. Critics say procurement processes, which successive defense ministers have struggled to reform, are slow, bureaucratic and wasteful. A number of projects, including in cyber security and technology upgrades, have come in over-budget or do not perform as intended, according to the federal audit office this week.

"Anti-corruption measures have suffered for years in the military's largest procurement bureau," the audit office said in a statement.

A union representing military personnel has blamed shortcomings on an unreliable arms industry and its lobbying influence, as well as the defense ministry's own lack of strategic thinking. That, the union has said, is itself partly a consequence of under-investment in the armed forces.

Scholz's big bet aims to reverse that trend. Once the money is there, how well the defense ministry can spend it is likely to become as pressing a question as how much.

Anti-nuke, anti-war, pro-planet: These are tough days for Germany's Greens, who have long stood for disarmament and renewable energy. Now governing in a crisis, they find themselves needing to go the opposite way.

To cover the energy gaps from Russia, most Germans are now willing to tolerate longer nuclear plant running times, as well as oil and gas imports from other totalitarian states, a new poll has shown.