Defense Minister Christine Lambrecht said Germany was "facing the consequences" of the new reality triggered by Russia's invasion of Ukraine. She stressed Europe's need to have the US as an ally and friend. 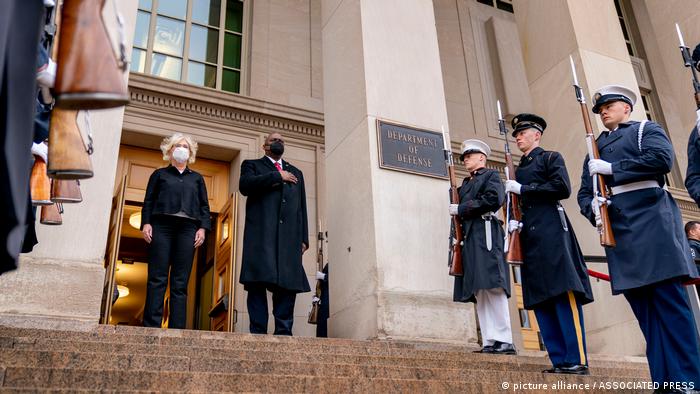 Prior to her meeting with Austin, Lambrecht spoke at a meeting of the Atlantic Council think tank, where she said Germany had "arrived in the new reality and is facing up to the consequences."

"Germany will achieve NATO's planning goals — and faster than promised. We will report the already planned army division ready for deployment two years ahead of time, as soon as 2025." Lambrecht noted.

Lambrecht: 'We stand together and we are reliable partners'

Lambrecht: Europe needs the US as ally

Despite the major pivot to increase defense spending in line with NATO goals and strengthen its own military in the wake of the Russian invasion of Ukraine, she said Germany's first choice would always be dialogue.

"We will never presume to go it alone. We will always remain closely integrated in the European Union, in NATO, in the United Nations," Lambrecht added.

Lambrecht praised US President Joe Biden's leadership in the global political crisis triggered by the Russian invasion of Ukraine, adding that Europe needs the US as a friend and ally.

"If we see today that Putin's plans are not working out, then we owe that also and precisely to this impressive unity," she said, noting that all of Russian President Vladimir Putin's attempts to divide the West have failed.

Lambrecht took aim at floating criticisms over its commitment to help Ukraine. "With regard to Ukraine, Germany has become the second biggest arms supplier in the meantime, I believe," Lambrecht added, without giving details. 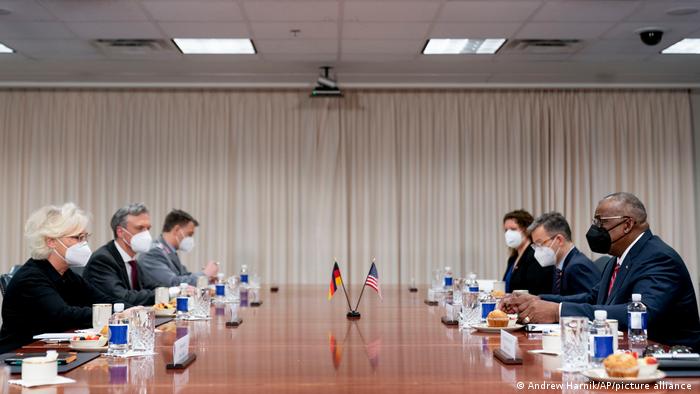 Christine Lambrecht stressed her country's commitment to dialogue and peace

Austin praised Germany for the "enormous leadership role" it has taken since the beginning of the war in Ukraine. He also said Berlin's decision to reverse its long-standing policy and send weapons to Kyiv was a "brave and historic" step that led other nations to take similar measures.

In the midst of Lambrecht's remarks, German newspaper Süddeutsche Zeitung (SZ) reported on Wednesday that the government currently holds a list of weaponry worth around €300 million (€333 million) ready to be delivered to Ukraine on short notice.

Lambrecht is said to have had "no reservations" about the deliveries, SZ reported, citing Defense Ministry sources. But the Federal Security Council must still decide on the matter prior to shipping them.

According to SZ, the list of weapons that could be supplied includes some 200 items. Among them are Matador-type anti-tank missiles, reconnaissance drones, mortars, automatic cannons, night vision equipment, thousands of protective vests and helmets.

Additionally, ground surveillance radars and other air surveillance equipment, as well as unprotected and protected vehicles, are also on the list.

German defense minister visits US: 'More than a routine visit'