Germany has announced a plan to prioritize military spending in light of Russia's invasion of Ukraine. A "special fund" will be set up to better equip the Bundeswehr. 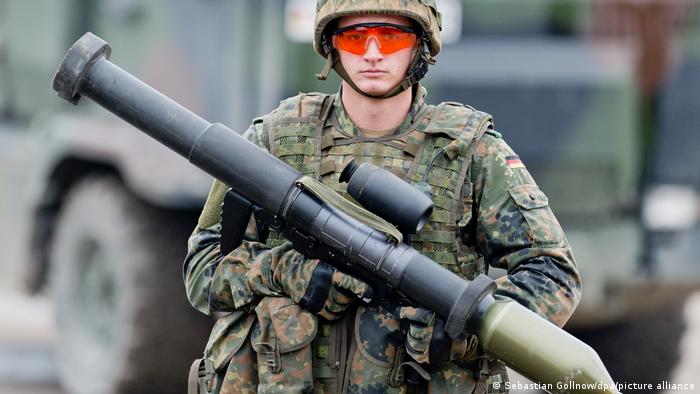 The boost in defense spending comes after the public circumspection of former German defense leaders who have said the military is unprepared for the challenges confronting European security after Russia invaded Ukraine.

German Chancellor Olaf Scholz announced a plan to beef up the German military on Sunday, pledging €100 billion ($112.7 billion) of the 2022 budget for the armed forces and repeating his promise to reach the 2% of gross domestic product spending on defense in line with NATO demands.

Scholz announced the new allocation in a speech during a special session of parliament on Germany's response to Russia's invasion of Ukraine. He said the spending would include investments and armaments projects for the German military.

Scholz also said Germany would supply the Ukrainian military with weaponry, in a reversal of previous policy.

"We need to support Ukraine in its hour of desperate need," the chancellor said.

"In attacking Ukraine, [Russian President Vladimir] Putin does not just want to eradicate a country from the world map, he is destroying the European security structure," Scholz told German lawmakers.

Why is the defense boost important?

"It's clear we need to invest significantly more in the security of our country in order to protect our freedom and our democracy,'' Scholz said.

Germany reported a record high in NATO defense spending for 2021, submitting a budget of €53 billion for the current year.

The €100 billion Scholz said would be dedicated for the armed forces this year is a one year boost though the move is significant, as Germany has often been criticized by the United States and other NATO allies for not investing enough in defense.

"We are not alone in defending peace," Scholz said, adding Germany would be deploying more forces to NATO's eastern flank.

Former German defense leaders have been publicly circumspect about the country's lack of military readiness since Putin gave a speech last Monday announcing his intentions and motivations for invading Ukraine.

The decision to step up and meet NATO's target for defense spending of 2% of GDP came as  bitter medicine to some lawmakers , who could be heard reacted negatively to the chancellor's announcement during the Bundestag address.

Germany reverses ban on weapon sales to Ukraine — as it happened