NATO: How useful is Germany's Bundeswehr?

Following the Russian attack on Ukraine, NATO has begun to reinforce its eastern flank. The German Bundeswehr is also involved. But critics warn the army is too depleted to act. 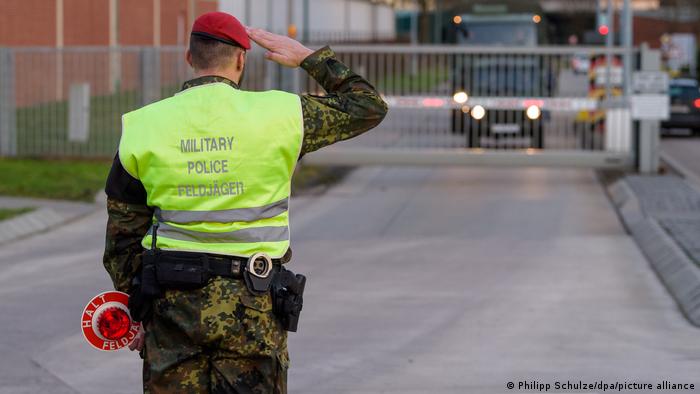 A top general of the German Army, Alfons Mais, sent shock waves through social media on Thursday when he posted an unusually frank appraisal on his LinkedIn page: "You wake up in the morning and realize: There is war in Europe. … In my 41st year of service in peace, I would not have believed I would have to experience war. And the Bundeswehr, the army that I have the duty to lead, is more or less bare."

Mais was openly addressing something Bundeswehr officers have been complaining about for many years: Germany has been neglecting its ability to defend its country and its partners. Instead, the German military has been focused on the sometimes controversial foreign missions in Afghanistan and in Mali.

Former Defense Minister Annegret Kramp-Karrenbauer struck a similar tone on Twitter, posting the same message of regret in English and German about the country's failure to prepare for this moment:

Officially, the Bundeswehr insists that it is not entirely helpless. Following the Russian attack on Ukraine, the Bundeswehr is now preparing for a possible deployment of the "NATO Response Force," the alliance's rapid reaction force that currently comprises a total of 40,000 soldiers. Germany contributes 13,700 troops to this force.

But the German military has been dogged by stories of depleted equipment for years. A Bundeswehr report from December found that 77% of Germany's military is operation-ready. It evidently considered that a good result — it being above the 70% target — since the military's leader, General Inspector Eberhard Zorn, made sure to add at the time that the Bundeswehr was "capable of fulfilling its tasks both inside and outside Germany at short notice, flexibly, and together with our allies."

And complex weapons systems like planes and tanks have proved particularly problematic. During last year's emergency evacuation of Afghanistan, the Bundeswehr was forced to rent freight planes made by, of all companies, the Ukrainian manufacturer Antonov. Germany's NH90 and Tiger combat helicopters, meanwhile, are hampered by long reparation times and a shortage of spare parts, and December's Bundeswehr report admitted that only 40% of them are currently combat-ready.

Similarly difficult to maintain are Germany's Puma tanks, an enormously expensive (they cost €17.1 million each) and enormously heavy piece of hardware that was already criticized because only crew of a certain height could get inside (soldiers could be no taller than 1.84 meters). This tank, built by German manufacturers Krauss-Maffei Wegmann and Rheinmetall, was forced by NATO to undergo several modifications in recent years, and only 65% of the around 350 the Bundeswehr owns are currently combat-ready, the December report said. According to the Bundeswehr website, the German tanks will be ready for NATO's Very High Readiness Task Force by 2023.

What is the German military doing now?

Meanwhile, German Defense Minister Christine Lambrecht announced on Thursday that her ministry had "triggered national alert measures." Lambrecht added that the population could see more military movements in public areas in the coming days and that there may be "restrictions in the transport sector, as transport capacities on land, at sea, and in the air must be kept available for military purposes."

Three more German Eurofighters jets are to be deployed to Romania to help secure NATO airspace. The aircraft are to be integrated into an Italian Eurofighter contingent. According to NATO Secretary-General Jens Stoltenberg, NATO now has more than 100 alliance fighter jets on alert.

Lambrecht had already ordered the reinforcement of the Bundeswehr's NATO contingent at the start of February when around 350 additional soldiers and 100 vehicles were sent to Lithuania. Among them was a self-propelled howitzer, considered a highly effective artillery weapon capable of firing at ranges of 30 to 40 kilometers (19 to 25 miles). The Bundeswehr is also leading a NATO battle group in the Baltic nation that is securing the alliance's eastern flank, a mission that NATO launched in 2014 after Russia's annexation of Crimea. 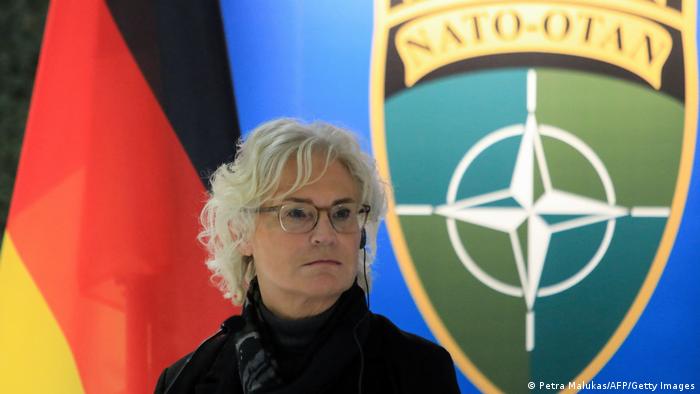 At the end of January, the German government had promised to deliver 5,000 helmets to Ukraine, triggering some international ridicule. But even those helmets have not yet arrived in Ukraine. "The helmets have been ready for pickup for several days," the Defense Ministry said on Tuesday.

"We are waiting for a sign from the Ukrainian government as to where they want the helmets delivered." If instructed to do so, it added, the helmets could be delivered within three days.

The German government maintains the position that, as a matter of principle, it will not supply "lethal" weapons to crisis areas, though it has bent that principle in the past. In this specific case, however, sending weapons would not make sense in view of "Russian superiority," according to the defense committee chairwoman, Marie-Agnes Strack-Zimmermann.

In recent years, Germany has mainly confined itself to supporting the Ukrainian army's medical service. Most recently, the German and Estonian governments jointly donated a field hospital worth more than €5 million ($5.6 million) to Ukraine.

But Ukraine sent a wish list to Berlin weeks ago that included a lot more than helmets and medical supplies.

"One or the other" from this list is still being considered, government circles said last week. However, it would also be necessary to see what was available at all. "We don't have any surplus night-vision equipment lying around in the Bundeswehr," one insider said.

In fact, the German defense budget has indeed increased significantly in the last five years, from €37 billion (2017) to €50.3 billion (planned for 2022). But in the years before that, the red pen ruled.

When a report on the state of the Bundeswehr's equipment was presented to the Bundestag for the first time in 2014, members of parliament reacted with shock, saying that the army lacked functional material and large-scale equipment ready for deployment on a large scale.

Little changed in the years that followed. There are still major gaps in some weapons systems such as helicopters, of which less than one in two is currently operational.

The Bundestag's defense commissioner, Eva Högl, doubts that Germany is capable of fulfilling duties at short notice. "The Bundeswehr's cold start capability is not what it should be," she said in a TV interview.

Högl called for an inventory and subsequent "hard-nosed" prioritization. Securing NATO's and Germany's borders must become a priority, she said: "It will probably be about: Fewer missions abroad with fewer forces, but a reinforcement for alliance and national defense."

For this, she said, the Bundeswehr must now be "prepared, equipped, outfitted and trained." If, for example, German soldiers in Lithuania lacked protection even against cold temperatures or rainy weather, that was "unacceptable for one of the richest countries in the world."

Defense Minister Lambrecht, only in office since the beginning of December, is now taking the same line. In view of the multiple demands on the Bundeswehr, she said she is reaching the limits of her budget and hopes for the chancellor's backing in the upcoming budget negotiations.

Chancellor Olaf Scholz agrees. However, the draft for the 2022 federal budget will be presented by Finance Minister Christian Lindner, and there had in fact been plans to lower the Bundeswehr budget again in the next few years. But in view of the war in Ukraine, his party, the neoliberal Free Democrats, has now also called for a defense budget increase.