Philipp Lahm has retired from international football, just days after leading Germany to its fourth World Cup title. The decision by the 30-year-old Bayern Munich player caught the country by surprise. 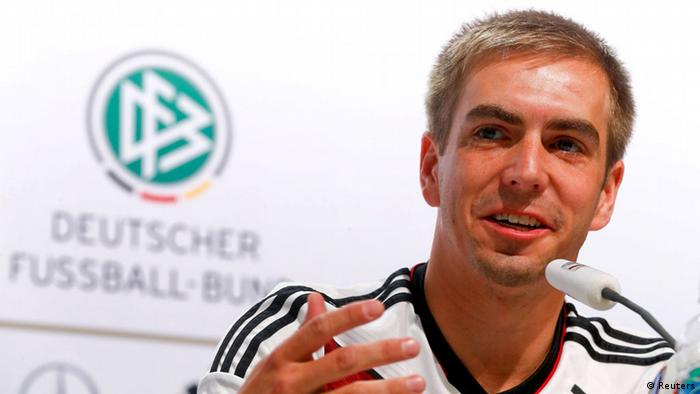 The news that Germany captain Philipp Lahm had decided to retire from international football was first published by the mass-circulation newspaper Bild on Friday. His agent, Roman Grill, later confirmed the Bild report on Friday to the SID news agency.

"This is the right time," said Lahm to SID. The defender-come-midfielder said he had been pondering the decision over the past season. "I decided that the World Cup in Brazil would be my last tournament."

The Bayern Munich captain later released a statement on the German FA's (DFB) website stating his thanks: "I'm happy and grateful that the end of my career comes with the World Cup victory in Brazil.

"I've been on holiday for three days now and have had the time to mentally conclude my international career."

The 30-year-old then signed off with: "Thank you so much for a wonderful time!"

Lahm is reported to have told coach Joachim Löw of his decision to step down from international football at breakfast on the Monday after Germany's World Cup final victory. Lahm also spoke to the German FA president, Wolfgang Niersbach. "I thanked him for 10 fantastic years of work together. I fully enjoyed my time for Germany," Lahm was quoted as saying.

Germany and former Bayern teammate Lukas Podolski tweeted his thanks:

Former Germany star Uwe Seeler said he didn't expect the news of Lahm's retirement. "I'm surprised, as I'm sure everyone is. This is a huge loss for the Germany team," said Seeler to the DPA news agency.

Bayern Munich chairman Karl-Heinz Rummenigge said: "There is hardly a better moment to retire [internationally] than after winning a World Cup."

The World Cup final was Lahm's 113th international cap. His Germany career spanned over 10 years and started way back on February 18th, 2004 in a 2-1 win against Croatia.

The victory in Brazil made him the fourth Germany captain after Fritz Walter (1954), Franz Beckenbauer (1974) and Lothar Matthäus (1990) to lift the trophy, but he is the only one to have lifted the trophy for a unified Germany.

Lahm is expected to see out the rest of his playing career at German club Bayern Munich. Lahm is captain of the record Bundesliga champions and has a contract until 2018.

Philipp Lahm has retired from international duty. His departure is a huge loss for Germany, but it's hard to do anything but congratulate him about his decision says DW sports reporter Andreas Sten-Ziemons. (18.07.2014)