Philipp Lahm has retired from international duty. His departure is a huge loss for Germany, but it's hard to do anything but congratulate him about his decision says DW sports reporter Andreas Sten-Ziemons. 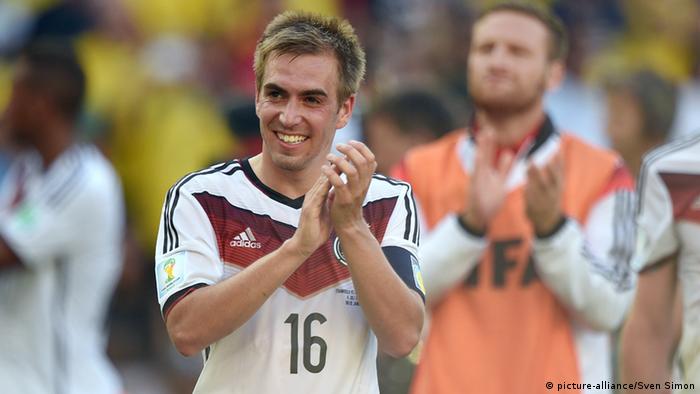 There probably won't be a better time to say goodbye. Germany captain Philipp Lahm celebrated his country's 2014 World Cup victory with his teammates in front of half a million people surrounding the Brandenburg Gate in Berlin. Five days later, Lahm called time on his international career.

He may have been one of the smallest players physically, but on the pitch Lahm was always one of the biggest forces. Since becoming a first-team regular in 2004, Lahm has featured in six major tournaments and has captained the side in 53 of his 113 caps. He twice finished third at a World Cup (2006, 2010), was once a European Championship runner-up (2008), before he crowned his departure with the 2014 World Cup trophy.

Now his time in Germany colors is over and a gap is left in his absence. Even before the tournament in Brazil, many experts felt that cloning Lahm to cover all of the defensive positions - left back, right back and defensive midfield - would be the best solution.

Lahm's decision means that coach Joachim Löw will be on the search for an internationally capable right back. Even more of an issue though will be the absence of Lahm's personality, character and experience. Over the last 10 years, Lahm has been one of Germany's most consistent and intelligent players. Without that, there will be both a tactical and an atmospheric difference in the side.

There's no doubt though that Löw's team will also be successful without Lahm, but his now former international teammates will have to up their game to make up for the departure of their captain.

That this decision comes for Lahm at the age of 30 after the greatest footballing success demands nothing but respect. After all, not every great player has made a similar choice.

Lahm won't be forgotten in football's history books. He'll continue to go on the title chase with Bayern Munich in the years ahead, and without the strain of international trips. He deserves it. Just as he did in his 113 international caps, Lahm has once again done everything right.