Millions of people regularly use illegal drugs. After Germany's upcoming parliamentary election, drugs legalization looks set to be a new issue on the political agenda. 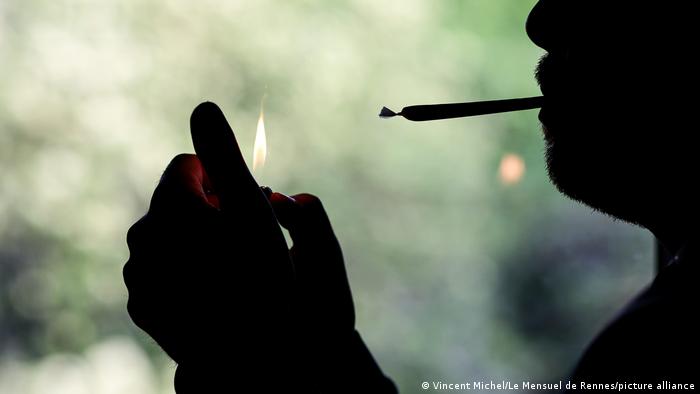 In Germany, one in three adults have smoked cannabis at least once

With watershed elections looming in Germany, some politicians are talking about a new approach to drug control.

The opposition Free Democrats (FDP), for whom civil liberties are a major issue, have called for the limited and legal sale to adults of "cannabis for leisure consumption." In view of growing global sales of cannabis for medical purposes and private pleasure, the business-friendly FDP is even looking to turn "Cannabis Made in Germany" into a lucrative export product.

Things are really beginning to happen in the debate over illegal drugs — and, above all, cannabis. Half a century of restrictive drug policies across Europe has not helped to significantly stifle demand or slash supply. Even the coronavirus pandemic has had no real effect on the flourishing black market.

Despite lockdowns and border checks, "at the beginning of 2020, the European drug market was characterized by the widespread availability of a diverse range of drugs of increasingly high purity or potency," said a report published in mid-June by the European Monitoring Center for Drugs and Drug Addiction (EMCDDA).

Sales of illegal drugs in Europe are now reported to be worth some €30 billion ($15.5 billion). And, just like in other countries around the world, cannabis is also by far the most popular prohibited drug in Europe. Despite all the bans and crackdowns, EMCDDA figures suggest that nearly 30% of all adult Europeans will try smoking cannabis as a joint or with a pipe at least once in their lives. In Germany, too, every third adult has smoked cannabis at least once in their lives, indicating there is a high level of acceptance for the drug in many sectors of society.

This explains why a growing number of lawyers and prosecutors, criminologists, police officers, and social workers are questioning the reasoning behind prohibitionist policies. Politicians are also beginning to ask whether the police and state prosecutors are the right instruments for protecting people's health. The discussion has been fueled by one key trend: In more than a quarter of all US states, adults are now permitted to buy quantities of their favorite narcotic — legally.

Four of the six parties currently represented in the Bundestag, the German parliament, are committed to backing an end to the prohibition policy.

Of course, there are differences between the various political parties. But the Green party and the FDP, the Left Party, and the Social Democrats (SPD) all agree that present drug strategies based on prohibition are a failure. They are all calling for new approaches to pave a path between strategies like legalization, decriminalization, and regulation.

Wieland Schinnenburg, the FDP's parliamentary group spokesman on drug and addiction policy, told DW that there are an estimated 4 million regular cannabis users in Germany. And their fates are being left to the ruthless forces of the black market, where there are no quality standards.

What's more, says Schinnenburg, the state is losing out on sizeable revenue. "If the market were to get official approval, the state would of course take in tax income that could, in turn, be spent on prevention and therapy."

So just how much money are we talking about here? Well, in 2018, that was precisely what Justus Haucap, professor of economics at Düsseldorf University, decided to find out.

He calculated the combined sum that could be saved in police and legal services plus income through tax revenue totaled around €2.6 billion.

The Greens are the only party to so far come forward with comprehensive draft legislation designed to tackle the problem. Their "Cannabis Control Bill" is mainly based on the controlled distribution of cannabis to adults at designated sales points. The idea is to dry out the black market, provide better protection for youngsters, remove some of the burdens from the shoulders of police and the legal system, and bring in tax revenue that could be used for prevention and treatment. But, last October, the Bundestag rejected the bill.

Heino Stöver says new initiatives in drug control policies are "long overdue." The Frankfurt-based social scientist is a familiar face for members of the Bundestag's Health Committee, where he regularly provides expert reports and testimony.

Speaking to DW, Stöver pointed to the high number of criminal cases on police records. "We have registered an all-time high with over 358,000 so-called narcotics offenses." Nearly four-fifths of that total, he continued, involve actual consumption. In other words: a user has been caught in possession of just a few grams of marijuana and a heroin addict with his daily shot. What happens is: harmless consumers are criminalized — often with devastating consequences for their workplace, a training position, or in their circle of friends and relatives.

Police and the criminal justice services find themselves buried beneath an avalanche of ultimately petty cases.

Not to forget the perils of the black market and the uncontrolled products that are sold there. The European Drug Report includes plenty of examples for the resultant horrors: Gangsters, for instance, who mixed inferior quality marijuana with lethal synthetic cannabinoids, leaving over 20 people dead in Hungary in the summer of 2020.

Heino Stöver dismisses any prospect of a drug-free, abstinent society as mere fiction: "And the majority of people in society don't share in that vision in the first place," says Stöver, pointing to the pleasure principle that is central to drug consumption. There are, he adds, very few societies in human history that have not actually resorted to drugs.

Daniela Ludwig, the German government's drug commissioner, only recently spoke out against an initiative to legalize cannabis — referring to the primary obligation to protect children.

But Ludwig, a conservative from the Bavarian CSU party, "did concede that deploying the full force of the law against somebody caught for the first time in possession of cannabis is counterproductive." She pointed to Portugal's policy of

"decriminalization, that is moving away from the application of criminal law and towards understanding that what we are seeing are petty offenses. A real alternative if coupled with binding counseling options."

But Germany's conservatives are far from united on such a strategy. In their 140-page manifesto for the upcoming election, there is not a single mention of the word cannabis.

However, when the dust finally settles on the autumn election and negotiations to form a new government coalition get underway, it will simply not be possible to sweep the many pressing questions surrounding drug policies under the carpet.