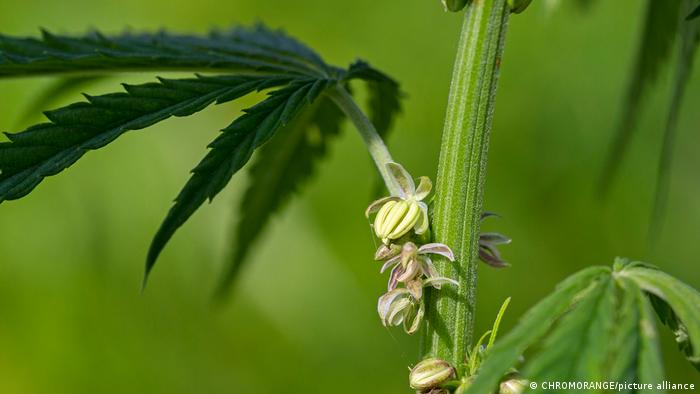 Hops are king in beer-loving Germany but the Green Party wants to give hemp its due, too

April 19 will go down in German political history as the day Annalena Baerbock was elected the Green Party's first-ever chancellor candidate. Assuming the party is ready to govern, the very next day may well be remarkable as well.

April 20, referred to among marijuana enthusiasts as 4/20, has become an international counterculture holiday, where people gather to celebrate and consume cannabis. Many such events have a political nature to them, too, advocating the legalization of cannabis.

On Twitter, the Greens wrote: "Cannabis is the most consumed illegal drug in Germany — the proportion of minors consuming it is increasing. For real youth & health protection there must be rules for the trade and a controlled distribution of cannabis!”

The position is also part of their draft party platform for this September's federal election.

At the moment, cannabis in Germany is only legal for medicinal use. The plant may only be grown, sold, owned, imported or exported with the permission of the Federal Institute for Drugs and Medical Devices and seriously ill people can be prescribed cannabis-based drugs.

Possessing cannabis is otherwise prohibited — punishable with fines or, depending upon the amount, imprisonment for up to five years under the nation's Narcotics Act (BtMG).

Still, punishment for private consumption is relatively mild. A person in possession of only a small amount of the drug can, according to the law, avoid prosecution — but small is a relative term.

Nevertheless, cannabis has grown in popularity, especially among young people in Germany. According to a study by the Federal Center for Health Education (BZgA), cannabis use has increased in recent years, with 10.4% of 12-to-17-year-olds and 46.4% of 18- to-25-year-olds having tried it.

Daniela Ludwig, the Federal Government Commissioner on Narcotic Drugs and a member of the Christian Social Union (CSU) — the Bavarian sister party of Chancellor Angela Merkel's CDU — explains: "The figures prove how important it is to educate young people about the health risks of cannabis use and to make it perfectly clear to them that smoking pot is not cool, but can be harmful to health! It's not for nothing that we have therefore launched a new cannabis prevention program."

How do the Greens want to legalize cannabis?

The Green Party says it wants “to dry up the black market for cannabis and push back organized crime” with its new drug policy.  To do so, they seek to pass legislation that enables the legal and controlled distribution of cannabis in licensed stores. Here are the key aspects:

The idea is to relieve police and public prosecutors of having to pursue low-level possession cases, while at the same time increasing financial resources that could be used for prevention, risk reduction and therapy, according to the party's website.

In 2020, Germany's Bundestag parliament rejected a cannabis control bill put forth by the Greens. The conservative CDU/CSU argued legalization would lead to increased consumption. One of their members, Stephan Pilsinger, pointed out the health risks and long-term consequences of cannabis use, noting that Germany already has enough people addicted to legal substances such as alcohol and cigarettes.

Angela Merkel's CDU is the last of the major political parties in Germany to maintain a strictly prohibitive stance on drug policy, refusing to agree to legalization policies laid out by the Greens, the Social Democrats, the Free Democrats and the Left party.

Last year, a Canadian study suggested that certain active ingredients in the psychoactive drug could also increase the protection of cells against the coronavirus. Researchers believe some ingredients may reduce the virus' ability to enter cells in the lungs, where it attaches, multiplies and spreads.

"The results on COVID come from our studies on arthritis, Crohn's disease, cancer and others," Dr. Igor Kovalchuck, professor of biological sciences at the University of Lethbridge, said in an email to DW.

If the study proves correct and is peer-reviewed by other researchers in the field, Annalena Baerbock could have a strong argument on her hand for the upcoming elections.

Annalena Baerbock has begun her first tour of Pakistan as foreign minister. The humanitarian crisis Afghanistan has been among the key points of discussion.