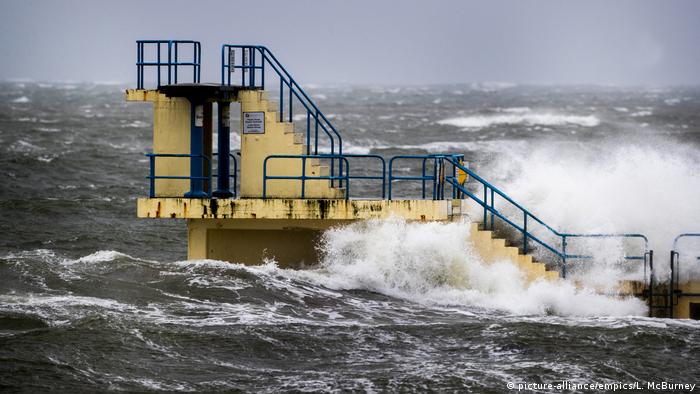 Britain and Ireland — where the storm is named Ciara — were hit by heavy rain Sunday morning as a strong winter storm began making its way across northern Europe.

In Scotland, the roof of a pub collapsed under the downpour, injuring three.

Authorities warned that the Storm Sabine, which approached from the Atlantic Ocean, would bring hurricane-strength winds of up to 120 kilometers (75 miles) per hour, heavy rain and thunderstorms to parts of the continent.

The German Meteorological Service (DWD) said Sabine was expected to batter the country's northwest from mid-morning Sunday, and then gradually travel south across central Germany towards Bavaria.

"Overnight into Monday morning the storm will reach southern Germany," DWD meteorologist Jens Hoffmann told DW. "We expect that there will be heavy gusts of wind in the lowlands, or even hurricane-strength gusts in the low mountain ranges and also in the Alps."

He added that the storm shouldn't be underestimated, and that people should avoid traveling and going outdoors.

"Looking at Sabine's structure, it's a remarkable storm," he said. "We mustn't forget that this is a longer-lasting event. You can't think: 'It's Monday morning, the front has passed.' That's not right — it'll continue."

Airport operators in Berlin and Frankfurt said they were monitoring windspeeds closely.

"We've mobilized and doubled all our forces in every region," a DB spokesman said, adding that personnel were prepared to respond to destroyed power lines and fallen trees.

Sabine, which has been dubbed Ciara in other European countries, prompted similar warnings in Britain, Ireland, Belgium and the Netherlands.

In Germany, the Bundesliga match between Cologne and Borussia Mönchengladbach was canceled, while the Dutch Football Association called off all four of Sunday's professional league matches.

In Ireland, part of an opening ceremony celebrating the city of Galway as one of Europe's 2020 cultural capitals was also "canceled in the interests of public safety," organizers said.

The storm has two names because there isn't yet a pan-European system in place for labeling weather systems. It was named Sabine in Germany, in line with a naming list established by the Free University of Berlin back in the 1950s.

Rail and air traffic in Germany have slowly resumed after a winter storm with hurricane-force winds slammed into western Europe. Several people were killed by falling trees and dangerous road conditions due to the storm. (19.01.2018)

Strong winds knocked down trees and disrupted rail links between Berlin and several other cities in northern Germany, train operator Deutsche Bahn has said. One man was killed when a tree fell on his vehicle. (30.09.2019)