Rail and air traffic in Germany have slowly resumed after a winter storm with hurricane-force winds slammed into western Europe. Several people were killed by falling trees and dangerous road conditions due to the storm. 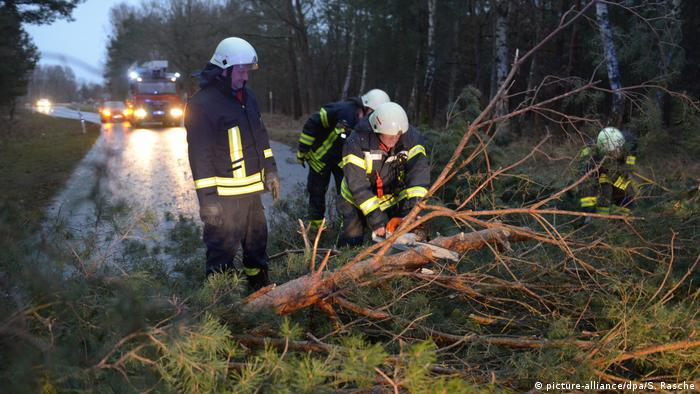 Normality and order slowly returned to Germany on Friday after it was battered by winter storm "Friederike."

At least eight people died across the country as winds up to 203 kilometers per hour (126 miles per hour) lashed western Europe on Thursday.

"In large parts of Germany, neither air, nor car, nor rail transport was possible," said Berthold Huber, Deutsche Bahn's board of management member responsible for passenger transport. "The decision to put the safety of our passengers and staff above everything else was the right one," he said, referring to the decision to halt all long-distance trains during the storm.

"Suspending rail traffic across the country when there are only extreme weather conditions in certain places is a jump too far," union chief Claus Weselsky told public broadcaster MDR.

"We expect that in the course of the morning, all large cities will be able to be reached with long-distance trains — with some restrictions," a statement said.

Do storms often cause train chaos? Trains are often delayed or canceled due to weather. But the last time Deutsche Bahn canceled all long-distance trains throughout Germany was in 2007.

How did this storm compare to previous storms? "Friederike" was considered to be the strongest storm in Germany since "Kyrill" in 2007, which insurers said cost €2 billion, but 2015's "Niklas" caused slightly worse damage.

What happens next? Rail authorities are surveying lines with helicopters, and then testing them with empty trains before opening them to passengers.

Winter storm Eleanor has caused traffic chaos and at least two fatalities as it slammed western Europe. Hundreds of flights were grounded and gale-force winds blew a train car in Switzerland off its tracks. (03.01.2018)