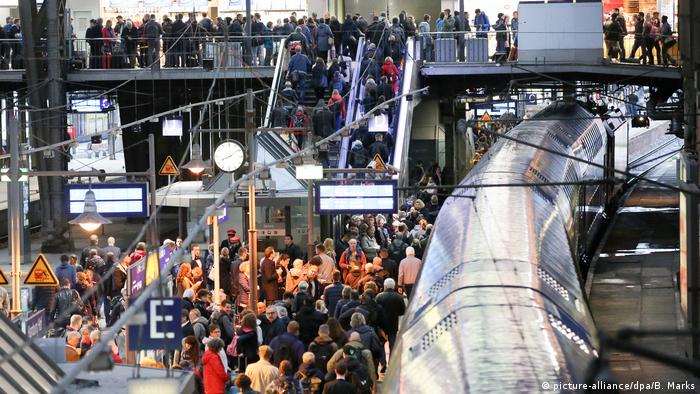 An Inter-City Express (ICE) train hit a fallen tree in Eystrup, on one of the links between Hannover and Bremen. Around 100 passengers were forced to wait before leaving the train, as it was not immediately clear if the power lines were still under electrical charge. They were later able to continue their journey two hours later on a replacement train, according to local public broadcaster NDR. The latest weather-related incidents come less than two weeks after another storm forces hundreds of DB passengers to sleep on the company's trains. 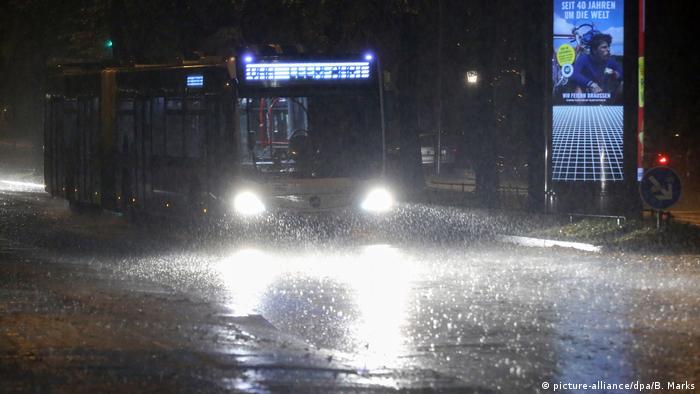 The storm brought heavy rain to the northern city of Hamburg

A 41-year-old man died in the east of Germany after a tree fell on his car, a police spokeswoman said. The incident occurred neared the town of Wittenberg, around 85 km to the south of Berlin.

Germany's weather service described "Mortimer" as a small front that was "moving quite quickly and should not be underestimated." The storm is expected to move eastward later in the day. Meteorologists warn of violent gusts of winds and possible short-lived but intense periods of stormy weather lasting until Monday afternoon.

Germany was not the only country to suffer. Two people were killed and several others were injured as severe weather struck Slovakia and Poland.

"Strong wind caused a tree to fall on primary school pupils on a pavement in Nitra" near Bratislava, Slovak authorities said on their Facebook page. "A 14-year-old boy died on the spot" and "several others" were injured, one seriously.

Meanwhile, in Poland, one person died and two others were hurt when a tree fell on a vehicle in the southern village of Nowy Nart, according to local firefighters.

Separately, some 120 firefighters were deployed to save some 330 sheep from a meadow near Dortmund, after the region was hit by a flash flood. A photographer working for the German news agency DPA said the meadow was submerged by between 1.5 and 2 meters (5 to 6.6 feet) of water. Around 20 of the animals died, according to Germany's RTL broadcaster.