Germany: Boy dies after being pushed in front of train

German police arrested a man after he shoved a boy and his mother in front of an oncoming train at Frankfurt's main station. The child was hit by a train and killed. The motive for the attack was not immediately clear. 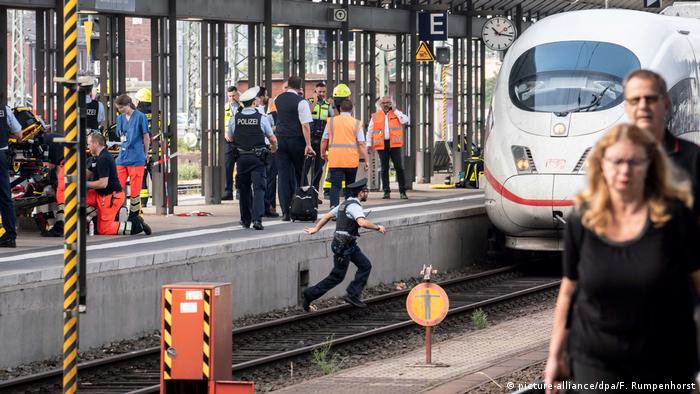 An 8-year-old boy was killed on Monday when a man shoved him in front of a moving train entering Frankfurt's main station, German police said. The boy's mother was also pushed from the platform, but was able to able to roll to the side and save herself.

According to police, witnesses said the attacker also tried to push another man onto the tracks as the Intercity Express train was approaching, but the would-be victim managed to avoid falling onto the track.

German law enforcement authorities said the 40-year-old man did not know the victims, and has so far refused to speak about his motive. Police said that an investigation is underway, and video footage of the incident will be examined.

The suspect initially fled the scene and managed to exit the station, but by-standers held him up outside the building.

The killing prompted a "massive [police] deployment" at Frankfurt's central train station, a police spokeswoman said. Firefighters were also at the scene. Authorities closed six of the platforms for several hours, causing train delays and cancellations.

Commenting on the incident, the premier of the state of Hesse, Volker Bouffier, said he was "stunned" by the "revolting act."

Germany Interior Minister Horst Seehofer cut his vacation short due to the incident and was due to address the public on Tuesday. He is set to meet Germany's top security chiefs and discuss "[s]everal serious crimes during recent time."

On Monday, Seehofer pledged that the attacker would be "called to account with all means of the rule of law." However, the minister also warned against drawing premature conclusions about the Frankfurt attack, after his ministry shared that the attacker was an Eritrean citizen.

"I note that some parts of the public have already formed a judgment of this incident," he said, adding that judgement should be reserved until the background of the attack is clarified.

With the German states of Saxony and Brandenburg heading for parliamentary elections on September 1, the apparent attack in Frankfurt is likely to fuel the emotionally charged discussion about refugee policy spearheaded by Chancellor Angela Merkel.

The latest tragedy comes only nine days after a 28-year-old man allegedly pushed a 34-year-old mother into the path of an oncoming train in the northwest town of Voerde, killing her.

The two incidents are likely to trigger a debate over increasing security at German train stations. On Tuesday, Martin Burkert, a Social Democrat focusing on transport policy, told Germany's mass-circulation newspaper Bild that there was not enough supervision on Germany's train platforms, and that train stations lacked enough police.

On Monday, a young Eritrean man was shot and gravely wounded in a small German town. The racially-motivated shooting has left the residents of Wächtersbach living in fear. DW's Miodrag Soric reports. (25.07.2019)