State and federal politicians have renegotiated planned reforms to Germany's Renewable Energy Act at a summit in Berlin. They agreed to drop proposed limits on the country's wind power facilities.

The country is planning a shift away from fossil fuels and nuclear power. "We have now made the first big step to safeguard the energy transition," said German Economics and Energy Minister, Sigmar Gabriel.

But, southern German states like Baden-Württemberg rejected the plans. They argued that this would effectively destroy the renewable energy technology market they have built over years. States like Lower Saxony and Schleswig-Holstein were also angry, saying the new plans would reduce their ability to create power in the wind-intensive northern states.

According to Gabriel, federal and state ministers have now moved from a top limit to a flexible cap. That means more wind farms will profit from subsidies. 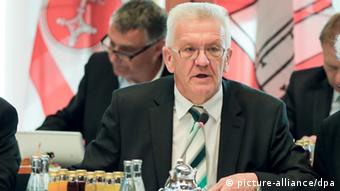 Baden-Württemberg's Premier Winfried Kretschmann was pleased with the agreement

Parties also agreed to replace old wind turbines with newer, more efficient models. This power capacity increase will not affect annual wind power limits. Agreement was also reached on subsidies for the less windy areas of Germany, in the south of the country. It's hoped these subsidies will promote wind energy development in these regions.

Winfried Kretschmann, Baden-Württemberg's Greens Party premier, was pleased with the new plans. According to Kretschmann wind energy gets more support now, than in the original reforms suggested by Sigmar Gabriel.

German Chancellor Angela Merkel confirmed her view at the meeting that the "renewable energy surcharge needs to be limited, while at the same time a path for the energy turnaround needs to be ensured."

Both goals have been met with this new compromise, says Merkel, but there are challenges ahead.

That's not the only reason why electricity in Germany is getting more expensive for consumers, but it is a big issue. Currently, electricity consumers in Germany pay some 23 billion euros ($31.73 billion) each year to help subsidize the country's renewable energy program. 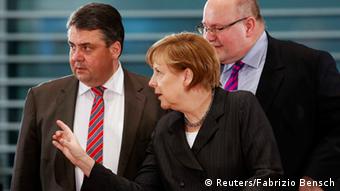 So far, big energy users in Germany have been excluded from paying the surcharge. The European Commission in Brussels is investigating the EEG law on these grounds.

Sigmar Gabriel says that he will continue to support this exemption, in order to help German industry. After the summit Gabriel thanked the states for their support during the EU investigation. "We are in agreement on what we have to achieve with Brussels, namely, that we have to continue to exempt energy-intensive industry in Germany from this surcharge in a way that doesn't breach competition regulations."

The altered draft bill reforming the Renewable Energy Act will be discussed by the German cabinet next week.

The German government and the federal states have agreed to reform the country's ambitious green energy law. What's missing in view of the Herculean task, says DW'S Jens Thurau, is a clear-cut message from Berlin. (02.04.2014)

The renewable-energy paradise running on diesel 09.09.2022

The Spanish holiday island of La Palma relies primarily on dirty energy, generated by a diesel power plant. The island has plenty of sun and wind. Energy operators are beginning to rethink slowly.