Germany's blood reserves are running low. So there is pressure to lift restrictions on donation by homosexual and bisexual men who currently have to abstain from sex for a year before being able to donate. 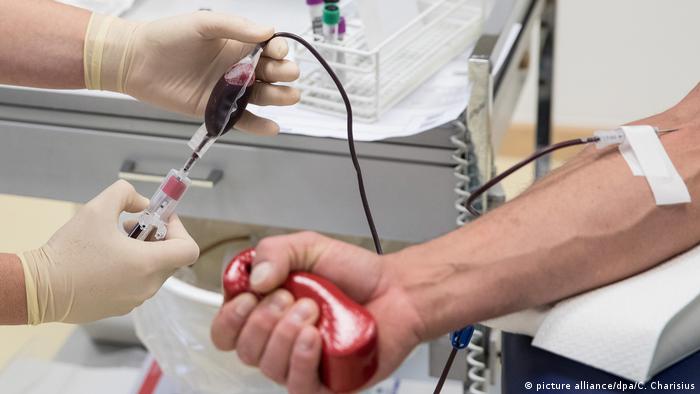 At a blood donation bank in Cologne, western Germany, empty bags sit ready to be filled. A few forms, a quick measure of blood pressure, a scratch on the arm, and seven minutes later donors have made their 500ml contribution to the 15,000 blood donations needed every day in Germany. The footfall of donors, now wearing face masks due to the coronavirus pandemic, is steady, but not fast enough.

Read more: Why blood donations are needed more than ever in corona times

"Corona sent everything into a spin," says Stephan David Küpper, head of the DRK's blood donation service in western Germany. The need for blood reserves is "growing enormously."

For weeks, the COVID-19 pandemic put many treatments and elective surgeries on hold. But as Germany ventures into the 'new normal,' regular, elective operations are being scheduled again in German hospitals. Cancer treatment which uses 20% of Germany's blood donations is also on the up.

On top of growing demand, social distancing and the closure of companies are posing a logistical challenge.

"A lot of our donation days are held at schools and workplaces. So many of these appointments have been canceled," Küpper says. "The clinics are running at full capacity, but substituting these locations and appointments is difficult."

Despite the desperate need for more blood reserves, restrictions that stem from bans imposed during the 1980s HIV/AIDS epidemic mean many men are still excluded from donating.

Read more: What does LGBT+ mean?

Under the "Hemotherapy Guidelines," published by the German Medical Association (BÄK), homosexual and bisexual men are only allowed to donate blood if they have abstained from sexual intercourse with a man for 12 months. Until 2017, a complete ban was in place.

Statistics confirm that men who have sex with men are more often affected by HIV than others. But this does not justify a blanket exclusion, says Germany's Aids Organization.

Instead, the organization suggests a "more understandable" deferral period based on the "diagnostic window" of HIV. After six weeks, an HIV infection can be safely ruled out with an antibody test.

Nikita Baranov, spokesman for "METROPride," the internal network for LGBT+ employees of the German wholesaler "METRO," says the current rules are discriminatory — an accusation the BÄK has dismissed.

According to the BÄK, the safety of the blood donors as well as the blood donations is based on "behavior-related assessment," not a person's sexual orientation. In a statement to DW, the German Health Ministry too said "sexual orientation is irrelevant" in the assessment of suitable blood donations. The restrictions apply also to sex workers and people with frequently changing sexual partners. Baranov, however, calls this "discrimination through the back door."

"No questions are asked about your sexual behavior that could determine the actual risk," Baronov says. "Questions like whether you're in a monogamous relationship or what sexual protection you use."

To skirt the restrictions, some men choose to conceal their sexuality when donating blood. For Baranov, this is out of the question. "By lying, I would be denying my sexual identity and hiding who I really am. I want to be myself."

With blood reserves dwindling, the pressure to reform the restrictions is mounting. In April, the "Prout at Work" foundation published an open letter — signed by a total of 13 companies including METRO, IKEA, Microsoft and Deutsche Bahn — calling on the German government and medical authorities to ease restrictions. The proposal is based on the British and Canadian examples, where the deferral period was reduced to three months in 2017 and 2019 respectively.

Depleted blood supplies during the coronavirus pandemic, also prompted the US to cut its waiting period from 1 year to three months.

In the German parliament on Wednesday, the issue is once again up for debate. Already in April, the Bundestag passed an amendment to the Transfusion Act which states that restrictions should be checked in the event of new medical findings to determine whether they are necessary. For some members of the opposition, however, the amendment doesn't go far enough.

The current modification to the law "does not end discrimination against gay and bisexual men and transgender people when donating blood," Green Party MP Sven Lehmann told DW.

Both the Greens and the business-friendly Free Democrats (FDP) have submitted proposals to remove the restrictions for homosexual, bisexual and transsexual men. "The guidelines are completely arbitrary, and enable a preconceived mistrust of homosexual men. This doesn't belong in modern society," says Lehmann."This is an old stigma from the 1980s. But by now in 2020 we've come much further. Therefore we need to assess the risk of the behavior of blood donors, but not the sexuality."