Police have cleared activists from a coal power plant and the rail lines leading to it, detaining several people. The protest impacted power output. Meanwhile, in Berlin, another group blocked busy intersections. Police in eastern Germany cleared climate protesters from the site of a coal power plant on Monday after the operator said their actions had forced a reduction in output.

Demonstrators targeted both coal storage areas at the power plant and the rail lines used to transport fuel to the power station in Jänschwalde, near Cottbus.

The group, whose "Unfreiwillige Feuerwehr" name roughly translates as "unwilling fire fighters," said that roughly 40 of its members were on site.

"We are taking the coal power exit into our own hands here, today," the group said.

The state interior minister spoke of an act of sabotage, while police said the case clearly involved criminal activity.

According to a spokesman for the Leag energy company, Thoralf Schirmer, activists disrupted both a coal storage facility on site and rail lines feeding the plant.

Schirmer called the activities an "attack on the security of [electricity] supply."

He said that the disruptions forced the lignite (or brown coal) power plant to run at roughly half capacity temporarily, but that normal service was resumed later on Monday. The reduced output did not lead to power outages. 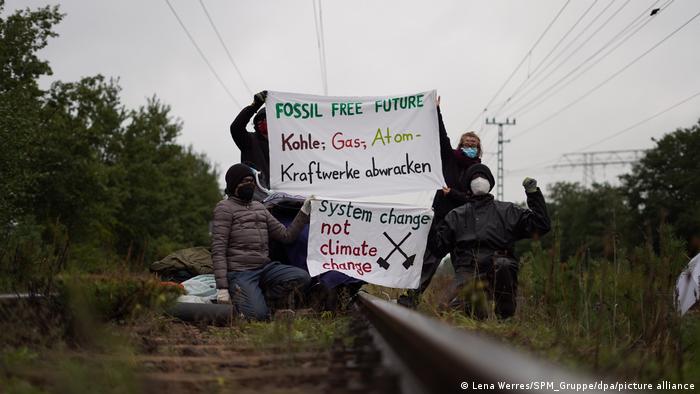 Police described efforts to clear the site as time-consuming, saying it was difficult to remove or detach the protesters from train tracks or other pieces of equipment.

Police did not comment on the number of people involved but a spokesman did tell German news agency dpa, "what's clear is that this is a criminal case."

Germany's plans to transition away from both nuclear power and coal were already set prior to Russia's invasion of Ukraine. But the conflict is putting pressure on plans to shut down the last nuclear reactor at the end of 2022 and the last coal power plant in 2038.

The Jänschwalde coal plant, for instance, may be firing up two more block units in a few days that had until recently been kept as an emergency reserve. This decision is still pending approval from the state environmental agency, however, following a challenge to the move to reactivate blocks E and F at the site.

Two of the country's last three remaining nuclear plants also look set for at least a few more months in service than previously planned, if and when government and the plants' operators can agree on a new timetable.

The issue is also causing tension in the coalition government, which incorporates the environmentalist Greens, the center-left Social Democrats (with a longstanding history opposing nuclear power but also with close historic ties to miners' trade unions), and the business-focused Free Democrats (FDP), which is urging its two more senior partners to waive their concerns in the face of high prices for Russian gas.

"We must get to the roots of the problem," Lindner said. "We need these power plants in the European electricity mix."

Meanwhile, in the capital Berlin, police mobilized to halt a separate protest organized by the "Extinction Rebellion" group.

People gathered at three major choke points in the city center, with the main group erecting a pink mock drilling platform outside the Federal Environment Ministry building at Potsdamer Platz.

They also congregated at two junctions off the Unter den Linden street, one adjoining Charlottenstraße and the other linking up with Friedrichstraße.  According to the organizers, 250 people appeared at the Charlottenstraße intersection alone.

Berlin's police said they deployed around 450 officers to deal with the demonstrators. This was difficult because several of them had glued themselves to the road or pavement, they said.

Extinction Rebellion complained that police checks and searches had impeded them. It also said it was planning further activity in Berlin on Tuesday.

A global nuclear phaseout, or renaissance?

With Germany and Belgium delaying their nuclear phaseout due to the war in Ukraine, is atomic energy getting a second life? Countries are still building new reactors, but some struggle to make nuclear pay.