Moldova is one of the poorest countries in Europe, but it is taking in the most Ukrainian refugees per capita. Berlin hosted a conference to support the country with an influx of refugees fleeing the war in Ukraine. 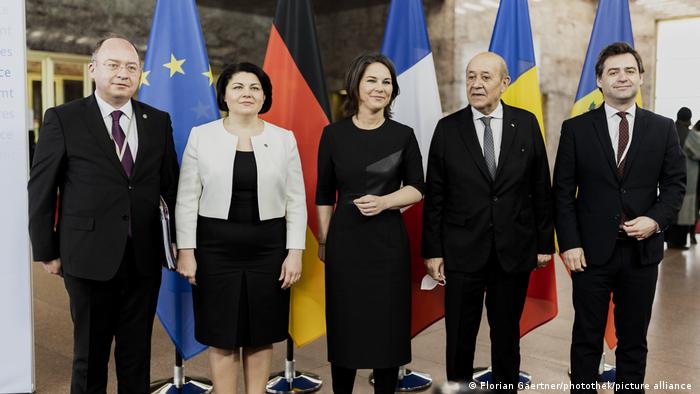 Germany invited French, Romanian and Moldovan representatives to a donor conference to raise money for Moldova

Germany said on Tuesday that donors had pledged €659.5 million ($717.8 million) to Moldova as the country deals with an influx of refugees from neighboring Ukraine.

"We will strengthen Moldova's resistance also in the financial sphere," Baerbock told reporters. "To this end, we agreed today to support Moldova with loans, budget support and other financial assistance worth €659 million."

Annalena Baerbock: No one is 'Russia's backyard'

Germany is hosting a donor conference on Tuesday to raise money for the small ex-Soviet country, which has taken in more Ukrainian refugees per capita than any other country despite being one of the poorest countries in Europe.

Germany and partners, including the EU, France and Romania, also want to help reduce Moldova's economic dependence on Russia.

"Together with our Moldovan partners, we want to assess how we can help reduce Moldova's dependency on Russia economically, financially, and with a view to energy needs, and to strengthen the country's resilience," said German Foreign Minister Annalena Baerbock.

What support did Germany pledge to Moldova?

"We have your back," German Foreign Minister Baerbock told Moldovan Prime Minister Gavrilita. She called the results of Tuesday's meeting just the "kick-off point for a long-term continuous support platform for Moldova."

Baerbock said that Germany has pledged to support Moldova in several key ways:

Baerbock also praised Moldova for having embarked on a "joint European path." Gavrilita formally signed an application for Moldova's accession to the EU shortly after Russia invaded Ukraine.

Gavrilita expressed gratitude for the pledges announced during the conference. She also called her country's request to join the EU an "expression of our firm attachment to the values and aspirations to be part of the free world."

"We want to be part of the European Union because we believe in the development of democratic institutions, good governance, justice, reform and the rule of law," she said, pledging to do what is necessary to gain acceptance.

Moldovan PM: 'The economic landscape in the entire world has changed'

Before the conference, the German government announced a plan to extend a no-strings-attached €50 million loan to Moldova.

"The German government wants to provide financial support to a country that faces huge political and financial challenges, especially because of the high number of refugees it has taken in and increased energy costs," the government said in a statement.

Gavrilita spoke with DW ahead of the conference. She said that aside from the parties to the conflict, Moldova is the country most affected by the war.

"Coping with this influx is one of the biggest challenges any Moldovan government has faced over the last three decades,'' she said.

Gavrilita told DW hosting refugees was only possible thanks to "an unprecedented mobilization."

Gavrilita said that more than 400,000 people have already fled Ukraine into Moldova, of which 100,000 have decided to stay.

'Moldovans sharing from the little they have'

"At a stable population of around 2.7 million, this represents more than 3% of our population, almost 4%," she said, adding that most of the refugees were vulnerable people in need of aid.

"We have thousands of volunteers, we have volunteer families who are taking refugees in. We have private sector organizations who are making donations, nongovernmental organizations. So it's really a society-wide effort," she said.

The prime minister added that the war is also affecting Moldova's economy.

"About 15% of our trade was with Ukraine and Russia and Belarus. The Odesa port was a very important logistics port," Gavrilita said.

These come on top of other issues also seen in other European countries, such as rising energy costs and high inflation, which has "already reached 18% in Moldova."

Moldova is also dealing with a separatist region along the border with Ukraine — Transnistria — where Russian troops have been stationed.

Gavrilita said Moldova is "concerned" about their presence, but added that it has not seen "any specific plans or movements" that indicate those forces would engage in the war in Ukraine.

This article has been corrected to reflect that €659.5 million were pledged to support Moldova. An earlier version contained an incorrect total. We apologize for the error.