Germany and France agree on climate cooperation with China 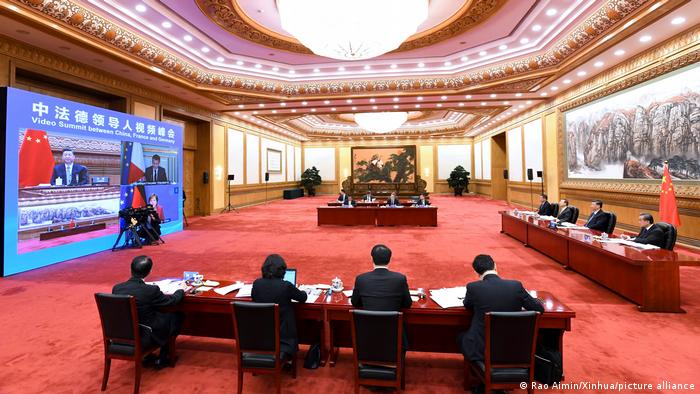 As the world's largest emitter of carbon dioxide, China faces a daunting task if it is to meet its already existing climate commitments.

What did the leaders discuss?

They also expressed support for China to adjust its shorter-term emissions goals.

At the talks, Xi is reported to have warned of the possibility that climate change could be used as a tool to disparage some countries for not doing enough.

"Responding to climate change is a common cause of all mankind and it should not become a geopolitical bargaining chip, a target for attacks on other countries or an excuse for trade barriers," the official Xinhua news agency cited Xi as saying.

The leaders also called for greater cooperation on protecting biodiversity ahead of an October conference on the issue in the Chinese city of Kunming.

China also talks climate with US

The talks came as US special envoy for climate change John Kerry was in Shanghai for a meeting with his counterpart Xie Zhenhua.

The pair represent the world's largest economies — and the biggest emitters of carbon dioxide. They were meeting ahead of an upcoming virtual climate summit on April 22-23. Some 40 world leaders, including Xi, have been invited.

The US and other nations are expected to announce more ambitious targets for cutting emissions during the summit. They were also expected to pledge more help for action on climate change by less wealthy nations.

The US officially rejoined the Paris Agreement on climate change in February after former President Donald Trump pulled the nation out of the accord.

In an interview with the Associated Press on Friday, China's Vice Foreign Minister Le Yucheng said that China was unlikely to announce targets beyond its existing commitments.

"For a big country with 1.4 billion people, these goals are not easily delivered," Le said. "Some countries are asking China to do more on climate change. I am afraid this is not very realistic."

The UK-based climate data provider TransitionZero on Thursday said China needed to halve carbon dioxide emissions from its coal-fired power plants by the end of the decade if it was to achieve its existing aims.