German women march in ′Slut Walk′ against sexual violence | Germany | News and in-depth reporting from Berlin and beyond | DW | 13.08.2011

Women clad in stockings and miniskirts have been out in force on the streets of Germany. Participants in the worldwide "Slut Walk" movement stress that skimpy clothing is not a justification for violence. 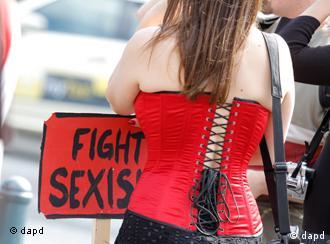 Scantily clad women took to the streets of German cities on Saturday as part of a so-called "Slut Walk" aimed at challenging opinions about sexual assault.

About 1,000 participants took part in a rally in Berlin, with some 200 taking part in a parallel demonstration in Frankfurt and 350 in Munich. Walks also took place in Dortmund, Cologne and Hamburg.

The marches have become a way for women and male supporters of the cause to confront the idea that women could avoid rape and other forms of sexual violence by wearing less revealing clothing. 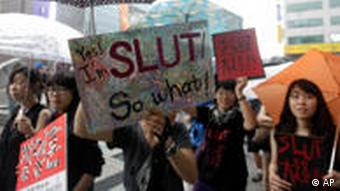 Slut Walks have been held in cities across the world, including this one in Seoul, South Korea

Among those taking part were women dressed in miniskirts, high heels and stockings.

A call for dignity

Mottos written on banners held aloft by participants included "The dignity of the slut is sacrosanct," and "beautiful, sensuous and sexy - but I don't want sex."

The reason for the protest was underlined by co-organizer of the Hamburg walks, Anna Rinne, in comments to the German news agency dpa.

"Even when people walk half-naked through the streets, it is not their fault if violence is committed against them," said Rinne.

The walks are part of a worldwide wave of protest that began in Toronto as a response to remarks made by a Canadian police chief. The policeman had said women should not dress as "sluts" if they did not want to be attacked, prompting a global response conducted via the website Facebook.

Walks have already taken place in cities as widespread as London, Mexico City and Sydney, with a demonstration also taking place in Washington on Saturday.

The global "SlutWalk" is a modest affair in New Delhi

Despite a name change, controversy and media attention, the "SlutWalk" took place in New Delhi on Sunday, July 31. The marchers protested against sexual violence towards women in the 'rape capital of India.' (02.08.2011)

WikiLeaks founder Julian Assange is fighting extradition to Sweden over allegations of sexual assault. The case has sparked a debate in the country about what constitutes rape. Does the law need to be modernized? (22.05.2011)

British justice minister in storm over different kinds of rape

There's rape and there's serious rape: that's what the British justice secretary, Ken Clarke, seemed to say. The comments came as he was arguing in favor of reduced sentences for rapists who plead guilty early on. (19.05.2011)