German UN envoy gets a grip on Security Council meetings

"And your time starts ... now." As Germany assumes the chair of the UN Security Council, the country's UN ambassador Christoph Heusgen has wasted little time in making some attention-grabbing changes. 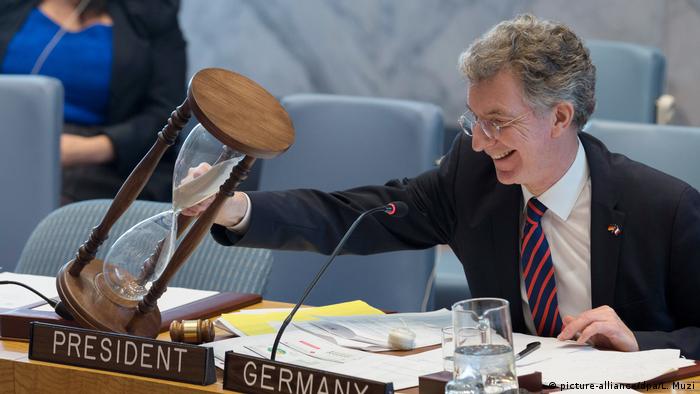 Germany's Ambassador to the United Nations, Christoph Heusgen, broke the status quo on Thursday in his first session as president of the UN Security Council by placing a giant hourglass on his desk.

"The egg timer runs for five minutes and 30 seconds and should help ensure that everyone who speaks keeps track of time," said Heusgen, who has pushed for more free speech on the council.

It's not the first time that Heusgen has intervened to shake up Council meetings. He recently called for members to move away from the common practice of reading out prepared remarks, and speak freely. The aim is to make discussions less tiresome and more engaging.

"German efficiency is helping speakers get to the point," a Twitter post from the UK's UN delegation read.

Germany, a non-permanent member of the UN Security Council, assumed the chair for the month of April as part of a "dual presidency" with France, one of the five permanent members on the 15-member committee. The presidency rotates on a monthly basis.

Germany's UN ambassador has called on the world body to give women a bigger say in peace mediation. The call comes as the country prepares to take up a non-permanent seat on the Security Council. (21.12.2018)