Germany's Defense Ministry says the NATO mission that it's led in northern Afghanistan will continue through 2016. Officials from the other 20 countries involved in the operation pledged support during talks in Berlin. 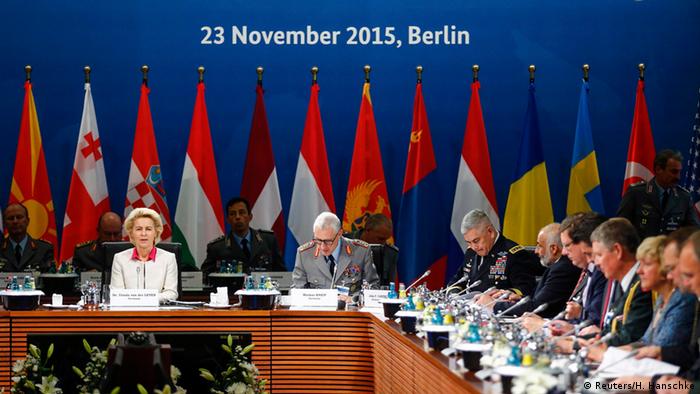 Defense Minister Ursula von der Leyen said Monday's talks had yielded "a very good result," with all partner countries indicating their "willingness to continue to provide all the necessary forces and capabilities available."

"We want to send a strong signal of reliability to the Afghan people that we are standing by their side," von der Leyen said following talks with her counterparts in the capital.

Germany's Bundeswehr currently heads a mission made up of 20 countries to train and advise local security forces in northern Afghanistan. About half of the 1,500 foreign troops stationed at the Mazar-i-Sharif base come from Germany, while other big contingents are from Georgia, Mongolia, the Netherlands and Hungary.

Originally, Germany had planned severe cuts to troop numbers by spring 2016, limiting its military presence to Afghanistan's capital, Kabul. But the deteriorating security situation that led to Taliban forces briefly capturing the northern city of Kunduz in September has prompted those plans to be reviewed.

Von der Leyen told journalists in Berlin that the recent Taliban advances meant the mission needed to be "adjusted," stressing that the aim was "long-term stability in Afghanistan."

Already in the past week the cabinet had decided to increase Bundeswehr troop numbers in Afghanistan from 850 to a limit of 980. The Bundestag is yet to formally approve that change. Germany has also raised the possibility of sending additional rescue helicopters to the country.

In an interview with DW, Afghan Defense Minister Mohammed Masoom Stanekzai thanked Germany for taking the lead in supporting troops in the country's north.

"That continuation will help to strengthen the Afghan national security forces … fighting the terrorist organization there," Stanekzai said. "The most important issue is that Afghanistan still needs the support of the NATO countries."

He added that "stability in Afghanistan will also contribute to greater stability in the region."

NATO ended its combat mission in Afghanistan at the end of 2014. About 13,000 foreign troops remain in the country in training and advisory roles as part of the Resolute Support operation. NATO foreign ministers are scheduled to meet in Brussels in December to decide on the future direction of the mission in Afghanistan.

Germany's Defense Ministry has announced that its service personnel will remain in Afghanistan for the time being. The news followed US plans to keep troops in Afghanistan until at least the end of 2016. (16.10.2015)

In the wake of the Paris attacks, France has asked its European partners for military aid in the fight against Islamists. Germany's Bundeswehr could complement French forces - for example, in Mali. (17.11.2015)